Switch to the dark mode that's kinder on your eyes at night time.

Switch to the light mode that's kinder on your eyes at day time.

Switch to the dark mode that's kinder on your eyes at night time.

Switch to the light mode that's kinder on your eyes at day time.

Red dogs are beautiful, but they aren’t common amongst the most popular dog breeds which usually makes them a rare sight.

And we aren’t talking about Clifford The Big Red Dog. But if you want to learn more about what real life dog Clifford is based on, check out our article!

So which dog breeds often have red-colored coats, for the sake of this list, we cannot include every dog breed that may have a few red-coated dogs. 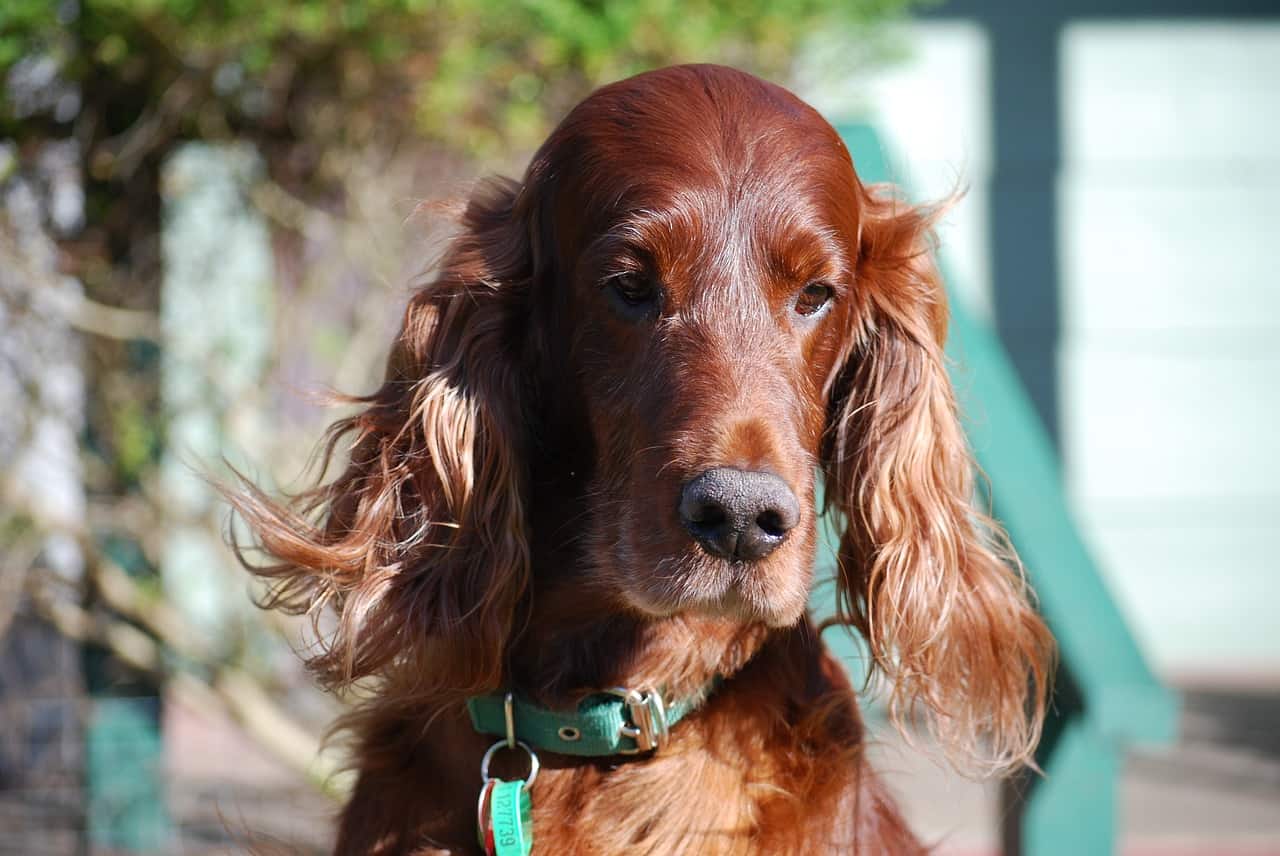 This dog breed goes back to the mid 17th century and was registered in the US in the year 1878. Of course, this breed was a result of crossbreeding in Ireland with the intention of creating the perfect gundog.

The dogs involved in crossbreeding were bloodhounds, spaniels, pointers, and other Setter dogs that were good for hunting at the time. There was a major boost in popularity in the 1960s and 70s due to a Disney movie and being Richard Nixons Presidential dog.

Other than their origins they are rather friendly dogs with a playful mentality. Due to their outgoing personality and high energy, they will require a lot of exercise. Which shouldn’t be a shock judging by their origins. 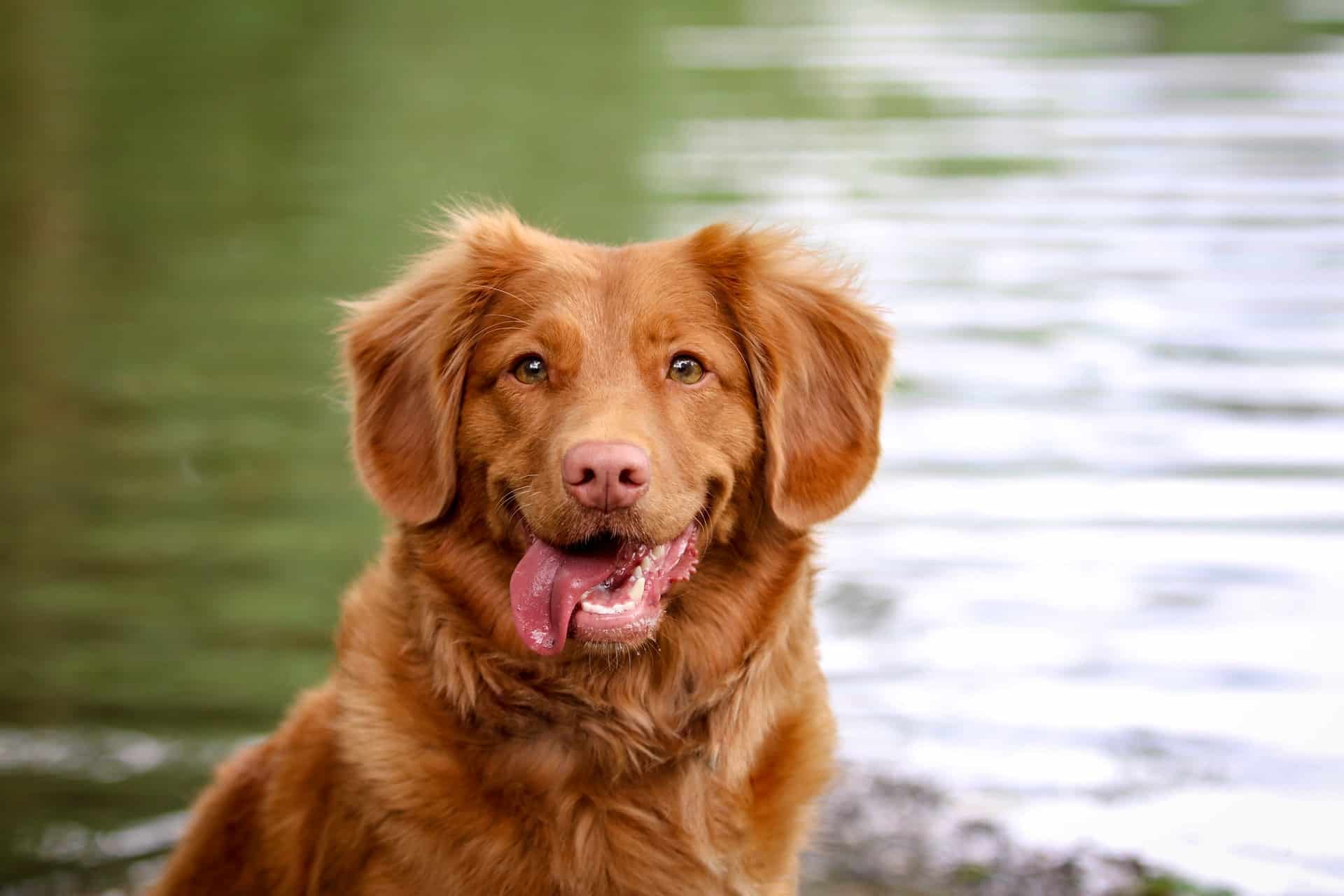 The Nova Scotia Duck Tolling Retriever was originally a unique hunting dog starting in Nova Scotia. What made this dog breed unique was its ability to lure in ducks into the range of hunters by tolling.

So what is tolling? Tolling is like dancing, and it was taught to them by their owners who observed this ability in foxes. With its retriever blood, this breed is able to retrieve the ducks after they were shot.

This breed is a result of several dog breeds including Setters, Retrievers, Spaniels, Collies and some other breeds. These combinations make them very energetic, very playful, and very intelligent.

These dogs are very capable of learning new tricks and are quite friendly with most animals and people with the right upbringing. They inherited several great behaviors and characteristics from their source breeds. 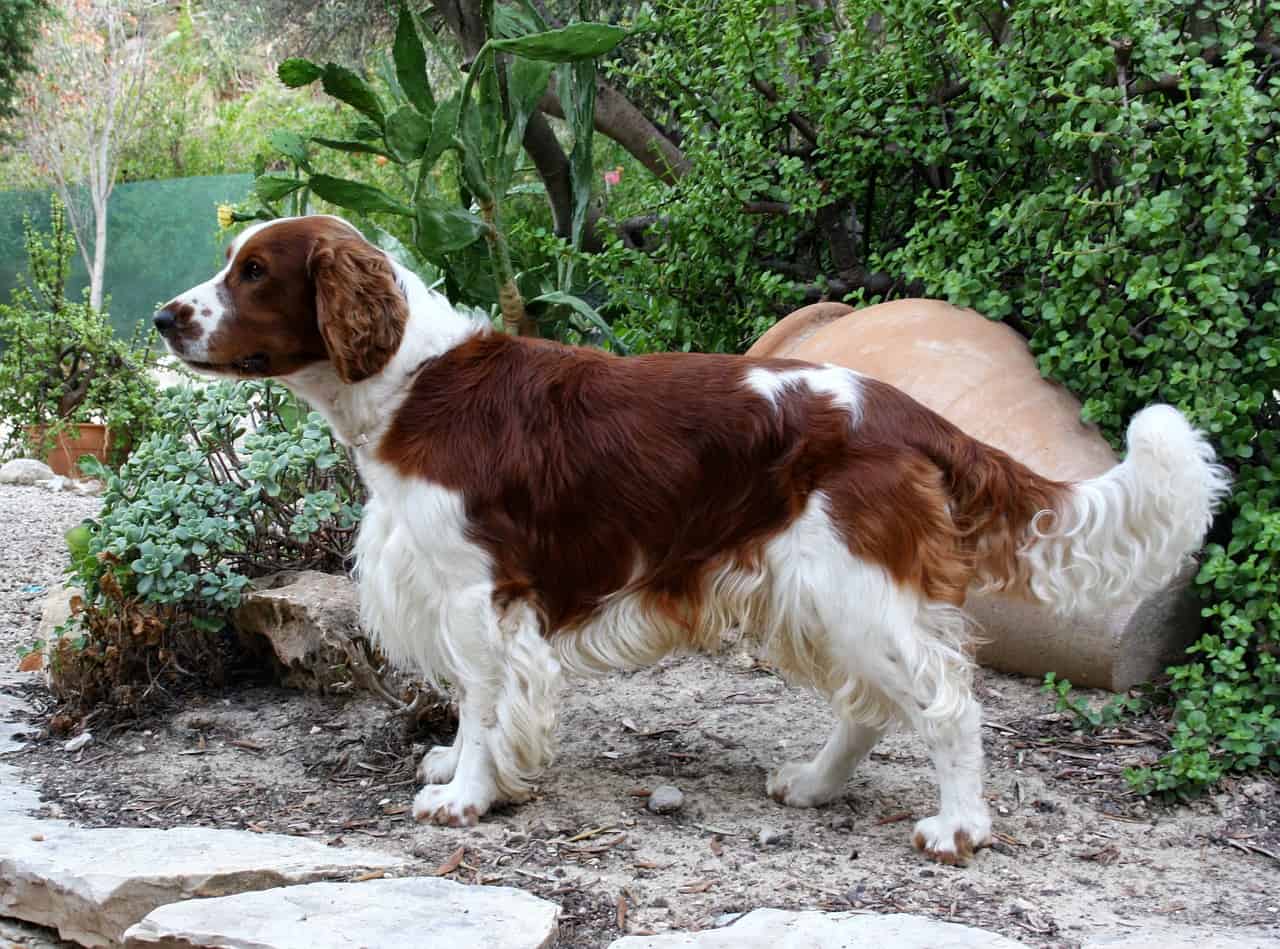 The origins of this breed is up for debate some may say it goes back to 250 BC but others may say it is from 13th century Wales. What is known is this breed is of the Sporting breed and is a very capable dog.

Sometimes used as a hunting dog, Welsh Springer Spaniels are gentle dogs that will want to spend every minute of their days to you.

This is often referred to as a velcro dog breed, however, in the case of the Welshie, this isn’t an issue as they are typically quite laid back.

Don’t think that doesn’t get you out of exercise because these dogs need it! They have an abundance of energy and require a lot of activity if you want to keep them happy and your home intact.

In the pattern of red dogs, this dog is another uncommon dog that was only recognized by the AKC in 2009! However, the UKC had registered them more than a century earlier as hounds.

The man responsible for creating this breed is George Birdsong who often hunted foxes. This was a very common sport at that time and actually was responsible for inspiring many hunters to breed new dogs that would make foxhunting easier or better for them.

Redbone Coonhounds won’t shed a lot and can be versatile as far as exercising and relaxing. With proper daily exercise, they will have no problem spending their extra time taking a nap as you watch something in the evening.

This breed is also quite friendly with people as well as cats if you train them properly. The younger you start the easier it will be for them to ease into a life of kindness to all other forms of life they are introduced to.

If you’ve ever thought, “Wow! That dog looks a lot like a Husky.” when looking at an Alaskan Klee Kai you’re more right than you know. Originally this breed was created as an attempt to make a more manageable companion-sized version of a Siberian Husky.

Which was accomplished successfully by mixing a Husky with two other dogs in order to reduce the size to exactly where she wanted it.

This breed is high energy and will require a good amount of exercise in order to keep them happy.

Although they have an abundance of energy they can be quite shy around strangers, but once they get comfortable with you they will be loyal, loving dogs that are a pleasure to be around.

Most of these dogs share a color combination similar to Siberian Huskies, a white and black pattern. However, there are breeders out there that do provide their more majestic looking red-coated color palette. 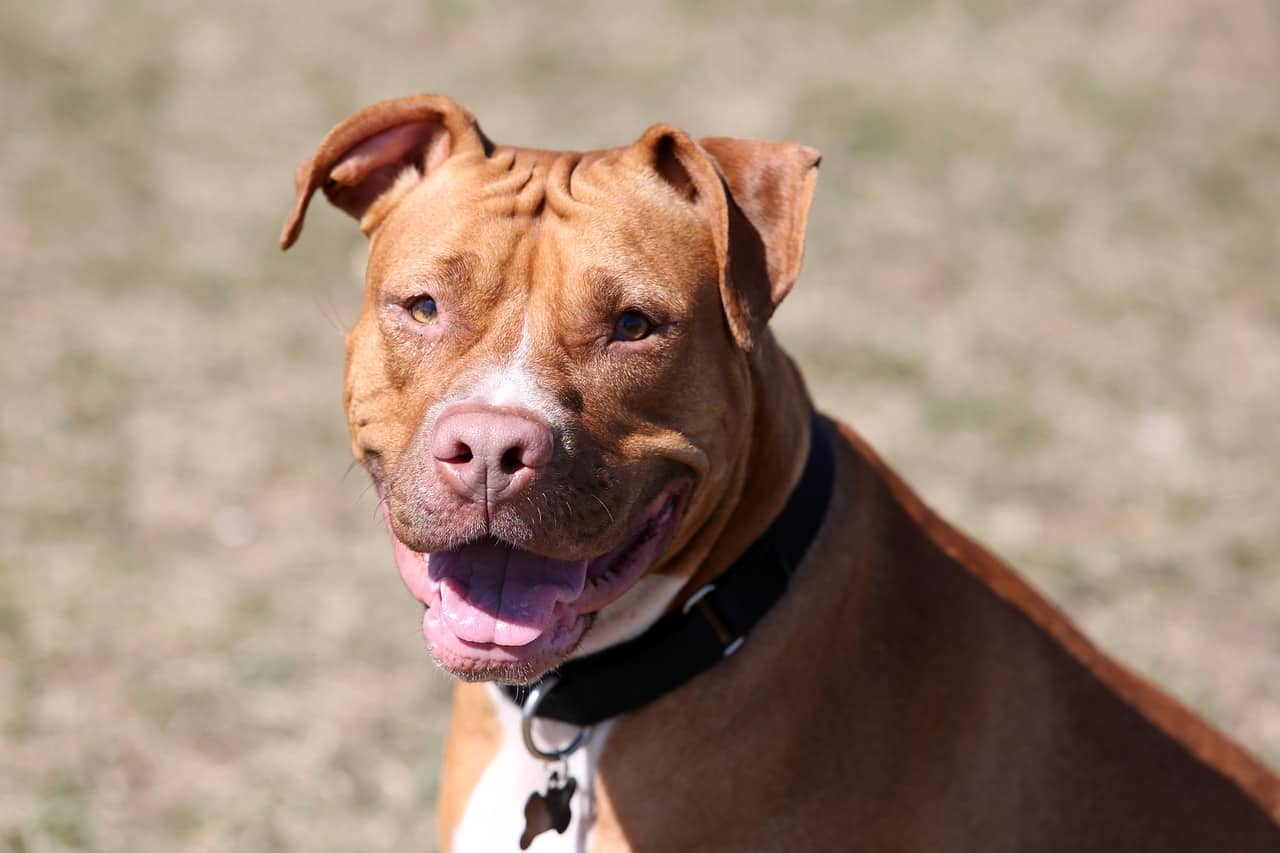 You probably know this dog by the nickname “Pitbull”, but this is their formal breed classification. Pitbulls, like many breeds at the time, were originally bred to work on farms and help hunters.

However, their strength and athletic build made them ideal for managing and hunting larger animals. They were often used to herd bulls and hunt wild boars as well as being loving dogs to their families.

Unfortunately, it wasn’t too long before this breed was put into awful now outlawed sports, and were even sometimes bred specifically for those sports. This bad reputation and unfortunate history led to its reputation today as one of the most aggressive dog breeds.

They are smart but intense dogs that have a tendency to bark which often makes them a natural watchdog. You should know that these dogs generally have a tendency to be unfriendly with other dogs and are often not allowed on local laws or community rules. 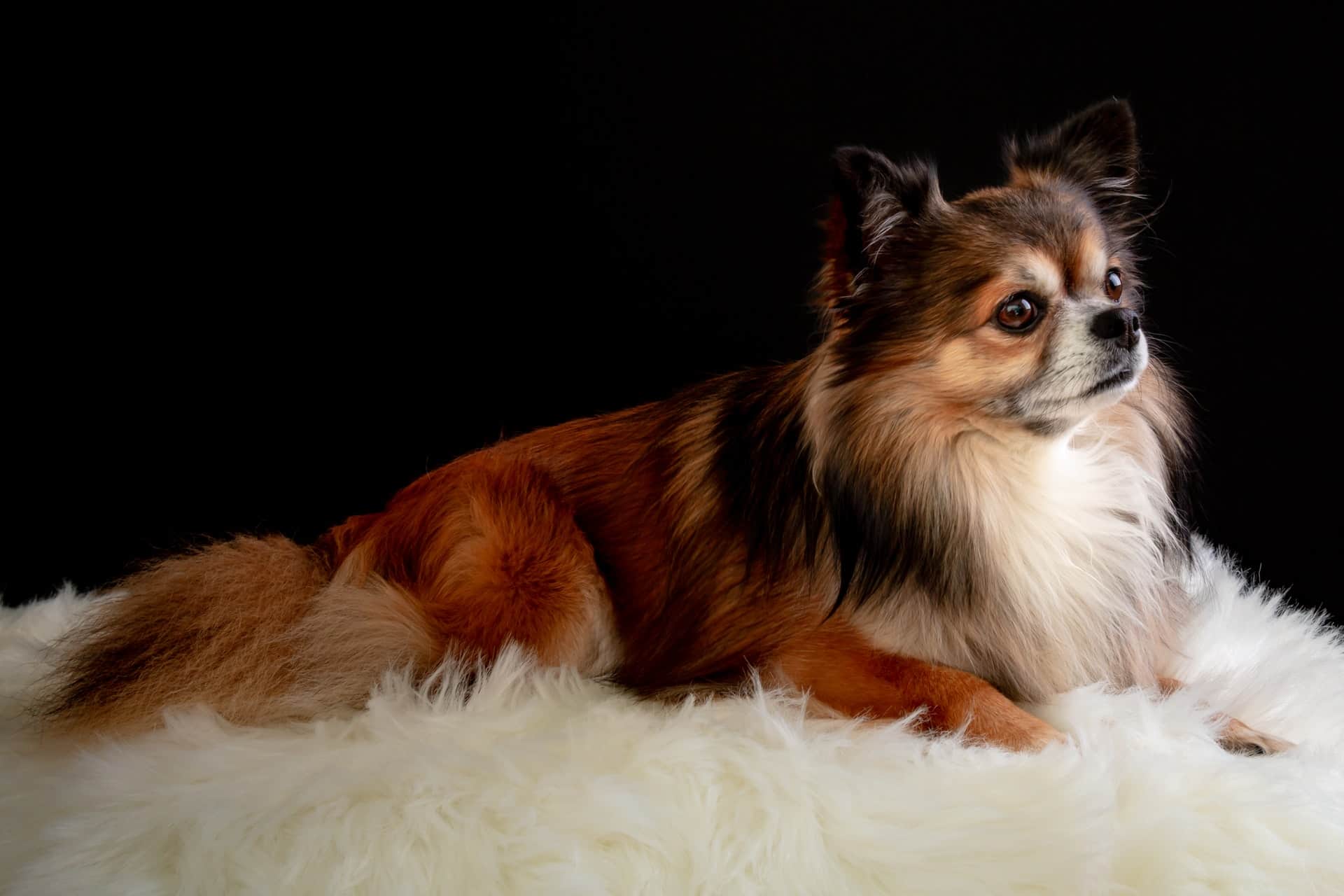 The Papillon dates back hundreds of years ago to the 16th and 17th centuries. As you may have derived from the French influence on their name, it was popular amongst the French during their revolution in the 17th century.

This dog is ideal for apartment living active dog owners that can handle the challenge of training this dog to avoid their instincts of barking. They are full of energy and are intelligent which means they need much stimulation to keep them from causing trouble or being unhappy.

You should know that they aren’t the most friendly dogs, generally speaking. Typically they don’t express affection to other dogs and children upon the first impression. This can be common in small dogs due to small dog syndrome, but it’s not a rule with small dogs just a theory. 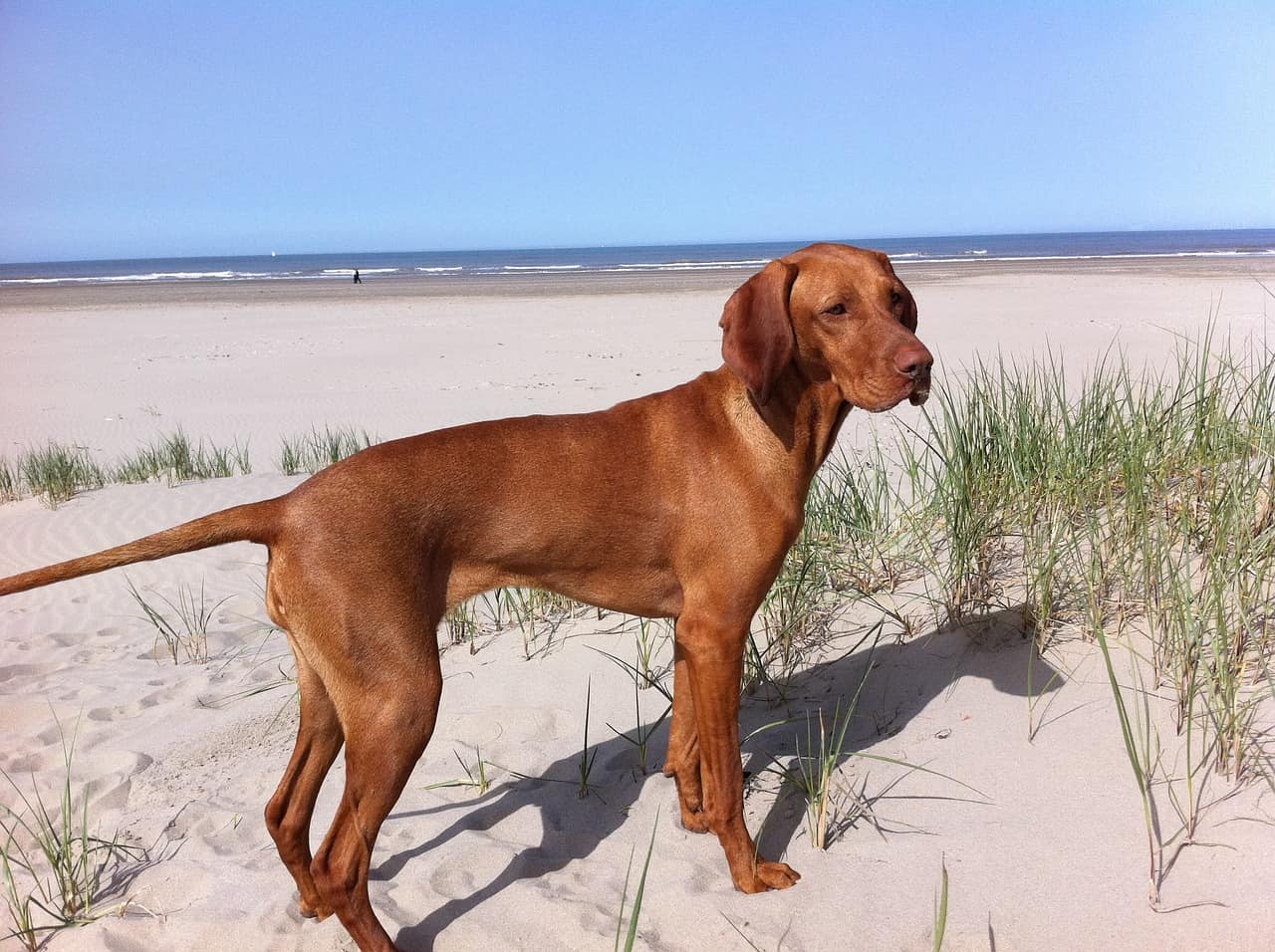 These dogs are from Hungary and can see dogs that look much like Vizslas in art from more than 10 centuries ago. But the most memorable part of this breed’s history is their experience as messengers during WW1 and WW2.

During those times, soldiers often used Vizslas to send messages to other soldiers because the human patrols they sent sometimes did not come back.

In one story told by Charles Mosansky, a Vizsla ran up to him and a few other soldiers and started digging at the ground. After a while, they discovered the dog was trying to tell them that the Russians were digging beneath them for a sneak attack.

Once they had this new intelligence they immediately evacuated to a new position, sometime later the Russians blew up the old camp thinking they had defeated them. When in reality they had been preparing a counter-attack and it was successful.

That was all thanks to the Vizslas smart mind and ability to think quickly on their feet. But their assistance in the numerous large battles they were involved in took a toll on their breed.

In fact, the breed nearly went extinct if it wasn’t for people overseas sending Vizslas back to the US after the wars concluded. This saved their breed and led to them assisting in more search and rescue work in the years to come.

As you can imagine as a dog companion they can require quite a bit of exercise to disperse their large amounts of energy. But if you are a capable trainer they can learn any trick you want them to. 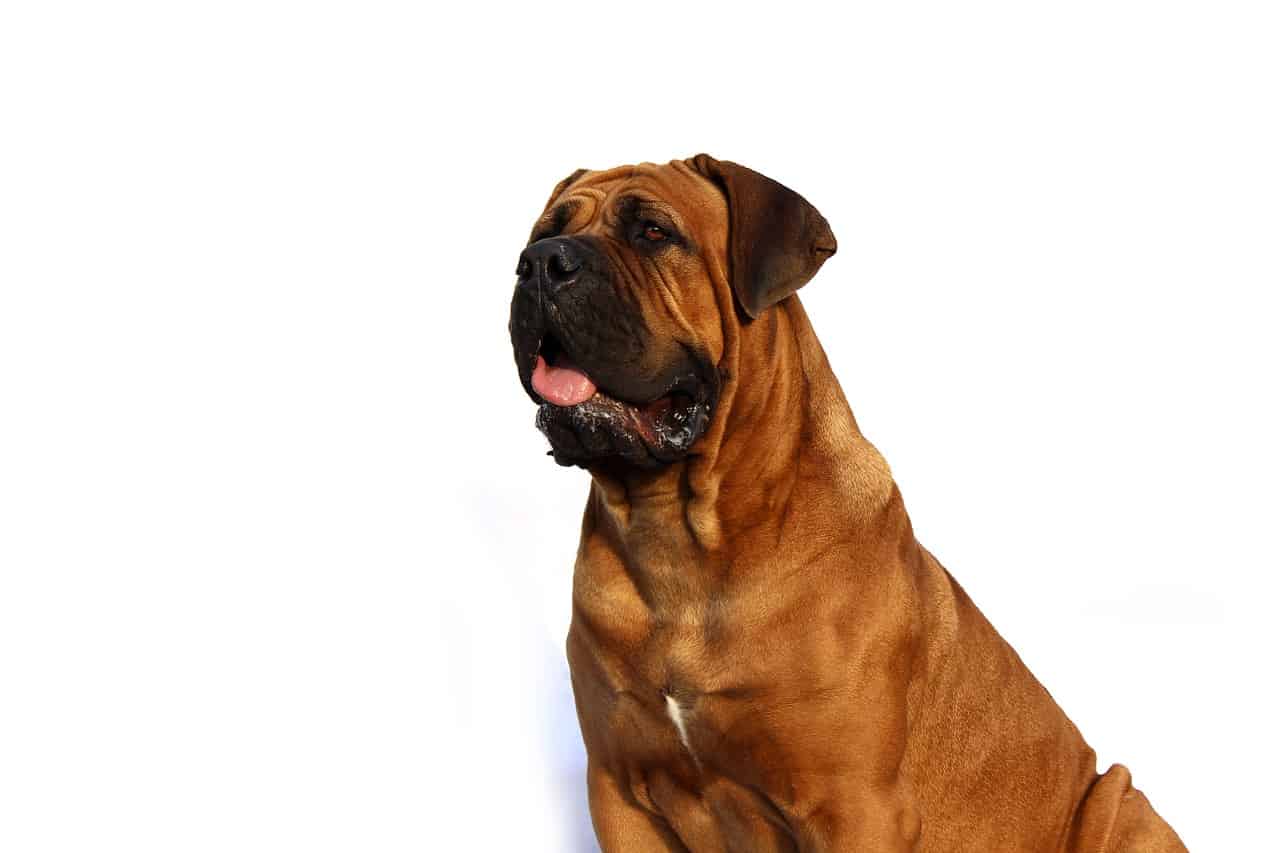 Boerboel originate in South Africa as a property guard dog. In South Africa especially, these dogs were used to guard diamond mines, which makes sense just by looking at them. Their average weight ranges between 110-200 pounds!

It was only recently that purebred Boerboels were becoming popular again because for a period of time they were being crossbred very often. Yet, in America and countries other than where this breed originates they can be very rare.

Boerboels are active dogs that can impress you with their agility if they are healthy and trained properly. Due to their origins as a guard dog, they can be a great watchdog, but they aren’t the friendliest with strangers. 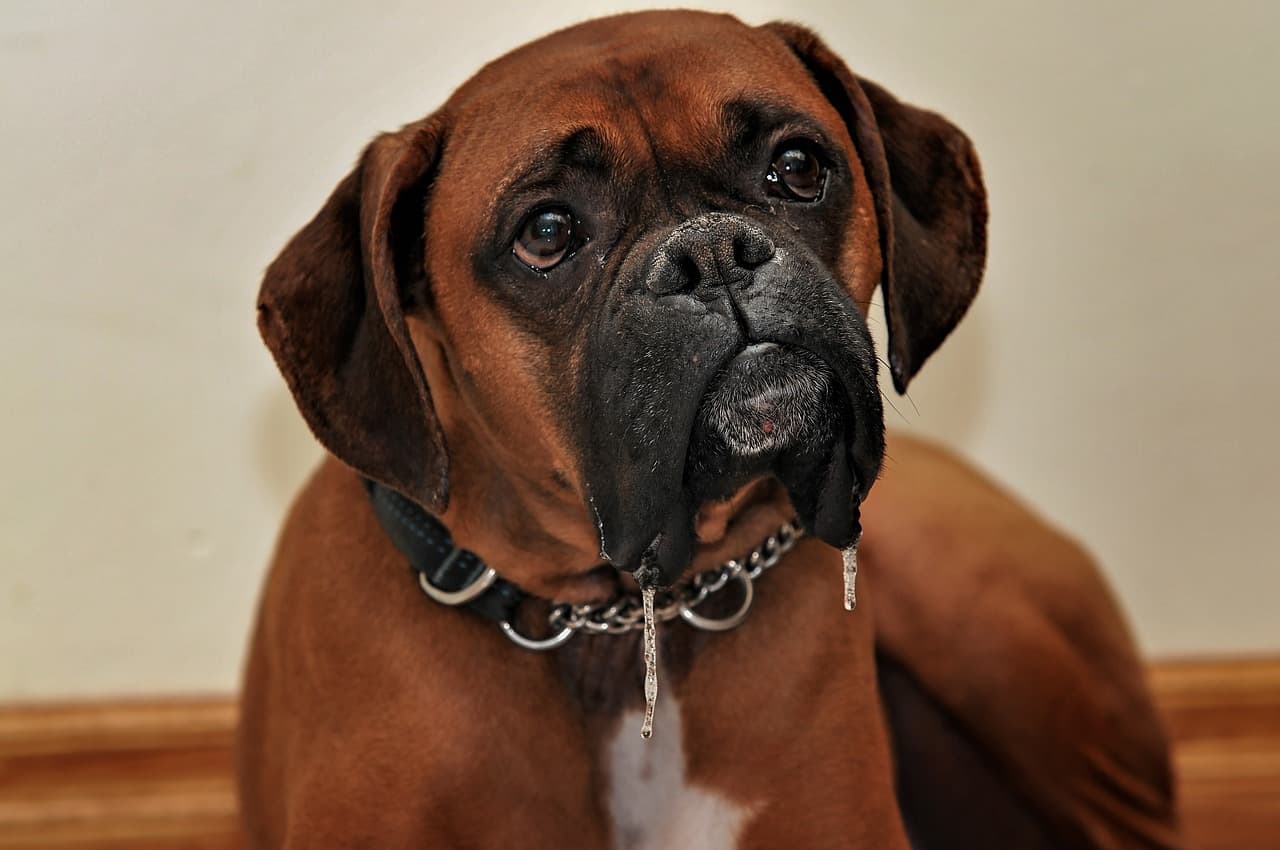 Boxer dogs aren’t typically red, most are brindle, chocolate, or even light brown, but if you look hard enough you can find a beautiful red Boxer. But what is their history and how did they become the dogs they are today?

The first boxer was born in 1880 and after some time creating developing the breed it was eventually trained for police work. Which led to becoming messengers for the German army in World War 1, an unfortunate occurrence that put much stigma on the breed.

However, breeding still continued and after several years the breed became much more popular all over the world. They are intelligent, kind dogs that are capable of relaxing with their family or galloping through a large open field.

We hope this list helped you discover more red dog breeds you didn’t know about! And if you did know about all of these breeds hopefully we were able to share some fun facts that you didn’t know.

If you are planning on adopting any of these dogs we have plenty more training tips and supply recommendations so be sure to check out whichever you may need.