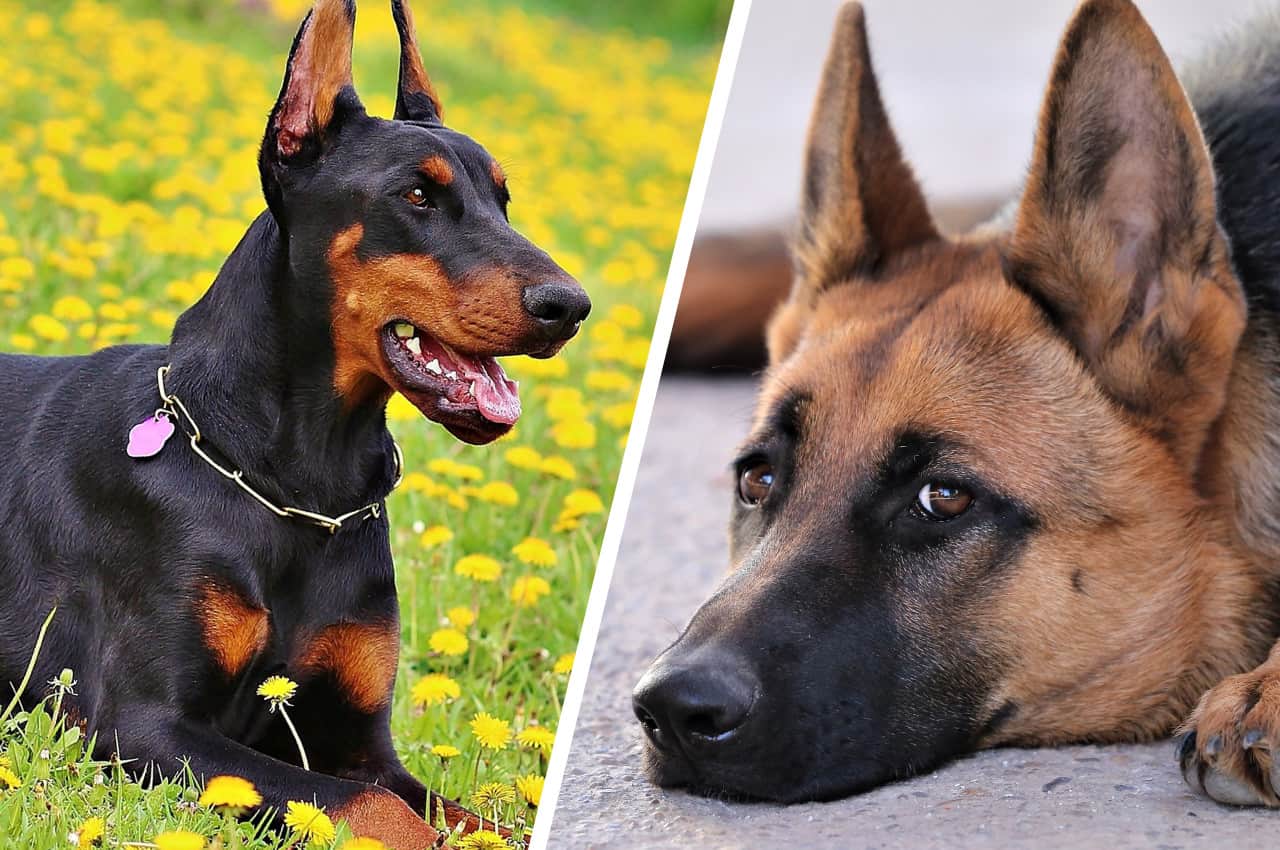 As a person who loves big dogs, and is hoping to start a family soon, I like to daydream about what dog would be best for my young family. It’s not weird!

Ultimately, the two things to consider are will the dog be good with my kids and will help it help keep us safe. This simple equation brings me to several possible outcomes.

Two dog breeds stand head-and-shoulders above the rest when thinking about home security.

I see these dogs used by the military, by police, and more-so on TV as junkyard guard dogs. So, the question is, which one is more suited as a family pet?

A Smidge of the History of Both Breeds

Both of these large breed dog varieties find their genetic origins in Germany. They are both considered confident, intelligent work dogs, but let’s dig a little deeper.

The Doberman is a ‘Pinscher’ breed. First bred by a German by the name of Louis Doberman, these dogs have always been used as guard dogs.

Doberman bred his ‘Doberman Pinscher’ from a variety of breeds, most notably the German Pinscher (bred as a rat killer) and the Rottweiler.

The Doberman takes its angular, elongated snout from the German Pinscher, adding the larger, more muscular frame and coloring of the Rottweiler.

This breed first came to being in the 1800s. The Doberman was officially added to the American Kennel Club registry in 1908 and has been one of America’s most popular working breeds ever since.

A Doberman named Storm won Westminster’s Best in Show back-to-back in 1952 and ’53. Dobermans became the official war dog of the US Marine Corps during World War II, where they acquired the nickname “Devildogs.”

While German Shepherds are most often associated with Police K-9 units — thanks in no small part to shows like Rin Tin Tin and K-9 — the primary reason for its breeding in the late 1880s was to standardize the herding breed.

As the need for herding dogs declines, German Shepherds began working as cadaver and drug dogs and guard dogs or watchdogs with the military and with law enforcement.

Toward the tail-end of WWII, the German Shepherd took over for the Doberman as the most popular military dog.

Because of anti-German sentiments during the periods of the world wars, the German Shepherd went out of fashion.

While unpopular in the US, during World War I, the English simply rechristened the breed, Alsatian. Many British dog enthusiasts still prefer the name.

Differences in Build and Appearance

Dobermans and German Shepherds are both imposing physical specimens of the dog world.

They are both, without doubt, large breed dogs. In both dogs, you will see an apparent intelligence and attentiveness in their soulful eyes.

Their sleek movements are reminiscent of their predatory ancestors and put one in mind of a strong and agile hunter.

When viewed side-by-side, the differences are immediately apparent. To bring this into focus, let’s zero-in on four distinct categories:

As you can see, the Doberman, on average, stands taller than the German Shepherd and, surprisingly, weighs significantly more.

While, at first glance, the German Shepherd appears to be thicker and therefore stockier, this seems to be an illusion caused by its longer fur.

Perhaps not visually apparent, the life expectancy of these two breeds can vary by up to five years difference, making the Doberman the longest-lived by a more than fair margin.

Both of these breeds possess a visually recognizable intelligence, as evidenced in not only their long work history but also their responsiveness to commands from their owners.

Each breed has a longer muzzle and a significant bite without any visible underbite, in fact, a slight overbite is preferable in each.

With powerful legs and muscular torsos, both the Doberman and the German Shepherd are ideal for outdoor work or play.

They move confidently across most terrain.

Major visual differences other than their coats would be the breed standard on tails and ears.

Typically, a German Shepherd has a long, shaggy tail that remains undocked and slightly pointed ears that face forward.

The Doberman, on the other hand, is expected to have a short, docked tail and clipped ears that stand erect and face slightly outward.

The classic German Shepherd possesses medium-length fur that is generally a mixture of tan and black in color. All combinations are acceptable, including the rare solid black.

White German Shepherds do exist, but they are considered a separate breed and thus in another category. Dobermans come in a variety of acceptable colorings.

Typically, the Doberman is black with rust-colored markings; however, red, blue, and fawn are also standard base colors.

As previously mentioned, both of these breeds are used extensively for Police and Military application.

This tends to give these dogs a somewhat negative appearance as family pets.

However, their use as guard dogs should not automatically insinuate that they are more dangerous than other breeds.

In fact, both breeds are intensely loyal companionable dogs who are eager to please their owners and crave affection.

Both dogs love to be active and play. They are wonderful dogs for the whole family.

With that in mind, Dobermans and German Shepherds are individuals, and every dog has its own personality.

Dobermans are incredibly responsive and highly intelligent, placing among the most trainable dogs.

Dobermans being large, athletically built dogs require a great deal of exercise to not only maintain physical fitness but also work off excess energy.

They are more suited for heat and do not have the coat to survive long in extreme cold.

Like any dog, this high level of energy makes them perfect for play; however, this can present itself as a negative for less active dog owners.

If not exercised properly, they can become more aggressive. Another positive/negative you can expect from a

Doberman is that they tend to bark a lot. This means they will alert you to intruders, but also be noisy.

These dogs crave companionship and need lots of attention. Socializing them early and often is the best way to make sure they play nice with others.

They have a tendency to latch on to one family member in particular.

Keeping them occupied with all members of the household can not only help stop them from growing protective of one over the other but keep their minds active and sharp.

Dobermans tend to live longer than Shepherds making them ideal family pets that can grow up with children.

However, to keep your pup active and healthy, you should have their hips and hearts examined regularly.

They tend towards Hip Dysplasia, Heart problems, and Spinal Instability and should be tested for von Willebrand’s disease.

German Shepherds bare many of the same characteristics as Dobermans. They are also among the most trainable dogs and are fiercely loyal companions.

While both breeds shed, owning a Shepherd comes with the assumption that you have a powerful vacuum.

They require more grooming than the Doberman but nothing out of the ordinary.

Shepherds are extremely loyal to their owners and make excellent guard dogs; however, they are not always great with strangers.

Socializing these dogs early and training to respond to commands is the best way to counteract this.

They do not typically work well with strange dogs, but if raised with other pets, they are just fine.

Bred to be herders, they generally work well with other animals, only not other dogs.
These dogs learn commands quickly and aim to please.

They can be more mischievous than Dobermans and appreciate more spontaneity in their playtime.

With their intelligent, playful nature, these dogs can grow bored and destructive.

You focus playtime on rehearsing commands and working skills. Training at regular intervals will keep their minds active and ensure obedience.

German Shepherds were bred to work and need to work.

Shepherds tend to be better with children than Dobermans, but that’s not to say that Dobermans can’t adapt to family life.

On this topic, it’s super important to train your kids as well as your dog.

Children should be present during training and work times so that they learn how to interact with and be a part of any dog’s training.

This will ensure that your children understand the kind of attention these large dogs require.

German Shepherd owners should get regular checkups for their pets. They have a tendency toward Hip Dysplasia, Elbow Dysplasia, Cardiomyopathy, and Cataracts.

REMINDER: Both Dobermans and German Shepherds are fiercely loyal dogs that can become territorial if not properly socialized. Spend time with your pet around other people and their pets to redirect this negative tendency.

Both dogs require a diet that is not only age and size appropriate but equal to their exercise level.

If a dog is working and playing daily for at least an hour a day, they will need a high-calorie diet.

For a large dog such as a Doberman or German Shepherd, two full cups of dry food a day might be necessary.

If the dog is not achieving the recommended exercise level, their calorie intake should be lessened. The dog will only need a cup and a half a day to maintain weight.

No matter your dog’s exercise level, you should always consult your veterinarian.

Consult your vet about what human foods might be safe for your dog before deciding to share your food.

Managing treats, especially during training, is of paramount importance to help your dog maintain a healthy weight.

Maintaining your dog’s fitness tends to have a positive effect on your personal fitness.

Dobermans and German Shepherds are both large work dogs bred in Germany in the late 19th century. They each gained popularity quickly.

While Shepherds were originally bred to herders and Dobermans have always been guard dogs, both breeds are perhaps the most commonly associated with the Military or the Police.

Both breeds are intensely loyal and companionable dogs.

Bred for work, both Dobermans and German Shepherds possess high levels of intelligence, excellent hearing, terrific sense of smell, and an eagerness to please.

To keep them from becoming territorial or possessive of one family member over another, the entire family should be involved in training and play.

No matter which breed you decide, realize that all dogs have unique personalities and will adapt to strong and consistent owners. Be active and adaptive.