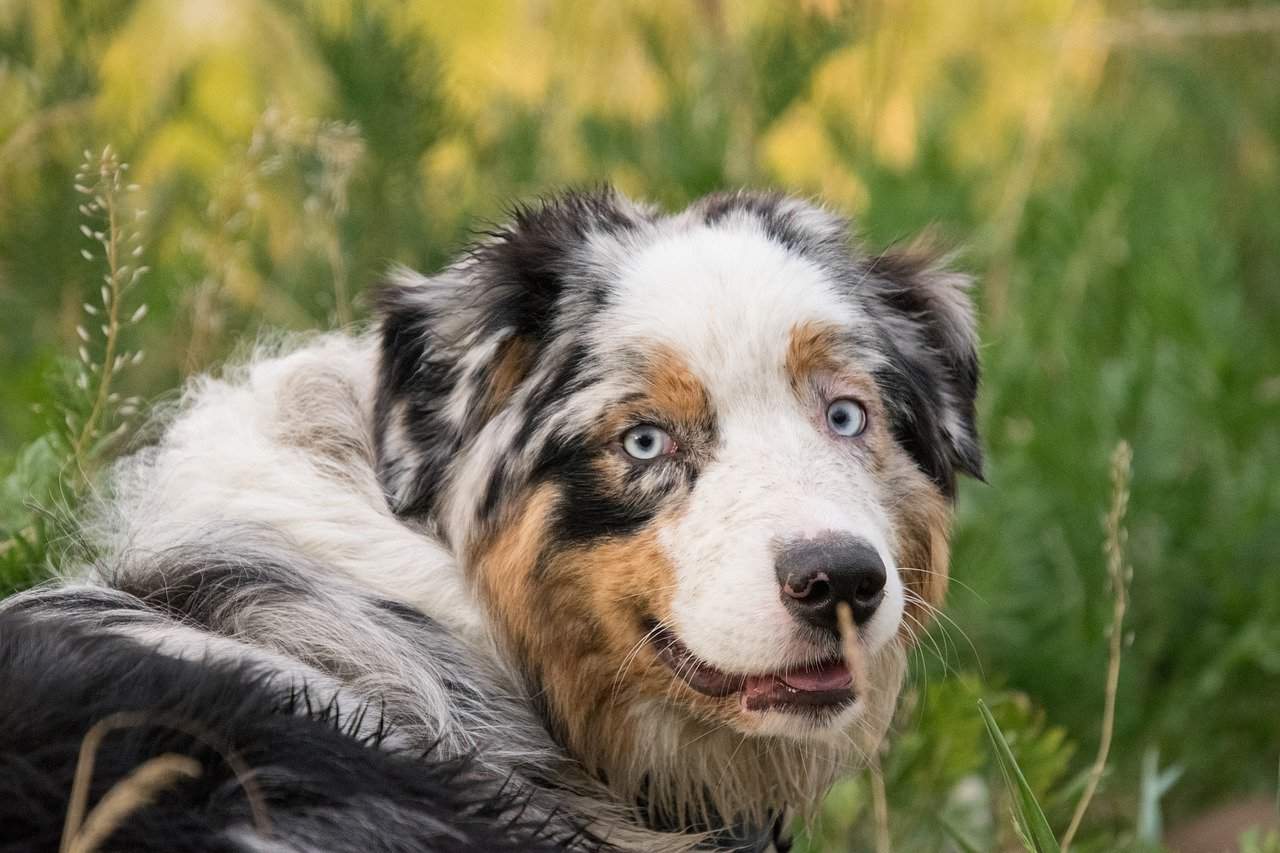 Few dog breeds are as appealing as Australian shepherds. These herding dogs are both active and intelligent, and no one who’s seen the stunning blue-eyed variety will ever forget the unique look of these dogs.

They’re talented herding dogs, to the point where they’re still actively used for that task, driving huge groups of sheep and cattle for grateful ranchers who are happy to have the help.

As unique as they are, though, Australian shepherds aren’t the only smart, athletic dogs with great herding instincts.

The attractiveness of Australian shepherds has led breeders to come up with many dogs like Australian Shepherds that have similar characteristics and qualities.

Collies are also similar to Aussies in that they’re very intelligent, but they tend to be slightly easier to train and handle.

Collies also have a reputation for being great with children, and they usually fit well in a multi-dog household.

These dogs have an illustrious history that dates back for centuries. The breed originated in Scotland, and collies actually attracted the attention of royalty, a history that started when Queen Victoria fell in love with the breed.

Many modern collie lovers can trace their love of the breed to “Lassie,” the TV show that featured a heroic collie, although the “character” of Lassie was actually played by multiple dogs as the show became more popular.

They quickly came to understand that while Lassie didn’t always save the day, he did embody most of the characteristics of a wonderful breed that many owners have come to know and love.

German shepherds have a reputation that transcends their categorization as a herding dog—they’re smart, intuitive, responsive and generally easy to train, and of course their reputation for heroism and police work is legendary.

They are larger than Australian shepherds, so that usually mandates a higher level of training skills if you’re going to opt for the German model of shepherd over their Australian counterpart.

The good news is that most German shepherds tend to be somewhat less energetic than their “Aussies,” counterparts, although they can be high-energy as they go through puppy-hood and then adolescence.

The other aspect of German shepherds that often gets overlooked is how wonderful they can be as family dogs.

They’re surprisingly gentle with children, and as long as they get plenty of exercise and they’re kept engaged with a “job” to do they’ll be happy to be a heartwarming, fun part of your life.

One thing to watch for with German shepherds is the medical status of their hips and hindquarters.

This used to be a serious issue with the breed, but as the problem evolved breeders have shifted their tactics to enhance longevity and reduce medical issues.

They’ve also come up with a new set of standards to grade the status of a given puppy’s hips based on X-rays and even MRIs in the case of high-end breeders.

So if you’re getting a puppy from a breeder, make sure you find one who emphasizes quality dogs and get the right answers to any medical questions you might have.

When it comes to dogs like Australian Shepherds, that offer many of the same attributes, border collies are at or near the top of the list.

Their biggest attribute is their intelligence, which is formidable even compared to other herding dogs.

If you see a dog that’s been taught elaborate tricks, picks up on human cues, and knows how to figure out and respond to the routines of its owners, chances are you’re looking at a border collie.

As for their herding capabilities, those are first-rate, too. Border collies were originally bred to herd sheep, and most of their early breeding took place in Scotland, near the UK border, hence the designation of border collie.

Their intelligence does require a bit of training acumen, though. Like Australian shepherds, border collies are high-energy dogs, which is why they’re beloved in the world of agility, and with the proper training many border collies go on to excel in competitions built around agility courses.

You don’t really have to go that far, but you will need to keep your border collie active and exercised, or you may find yourself dealing with a mischievous dog who always seems to be one step ahead of you.

But if you keep your border collie on the go, you’ll find yourself with a loyal, loving dog that will become a beloved family member for years to come.

Few dogs are as engaging as the Shetland Sheepdog. “Shelties,” as they’re known in the vernacular, have a reputation being willing to work, and their size doesn’t prevent them from taking on larger animals when it comes to herding.

Shelties have been used to herd sheep, poultry and even small horses, so they’re always up for a challenge when it comes to herding.

These herding instincts can also surface in daily life. This is true of any herding dog, but don’t be surprised if your sheltie starts trying to steer you here and there without your realizing it.

Fortunately, this tendency is easy to handle with quality training. They respond well to human cues and positive training, and the more you work with them the more their innate intelligence tends to come to the forefront.

They’re also very friendly, especially if you like to exercise and be out and about. They can be reserved around strangers, though, so don’t be surprised if your sheltie tends to take some time to warm up to new people in your life.

Shelties also play well with others when it comes to different dog breeds. They’re a peaceful lot, so the worst thing you’ll likely see is your sheltie trying to herd any smaller dogs that may be a part of your canine family.

And of course they’re simply adorable. Shelties look like miniature collies, which is part of the reason prospective owners tend to experience love at first sight when they look into these amazing dogs.

While they weren’t originally bred as herding dogs, Irish and English setters have some noteworthy things in common with Australian shepherds that make them very appealing.

Starting with the athleticism. These dogs were originally bred to replace spaniels for some hunting needs, and their combination of intelligence and scenting skills quickly made them incredibly popular.

They’re also beautiful dogs. English setters have an elegant look that belies their speed and strength, and they have a lovely silky coat that’s a favorite among those who adore this breed.

Irish setters are often described as “noble-looking,” which is often a reference to the gorgeous red coat, although there are other color varieties.

Both breeds are also extremely intelligent, with a mischievous streak that most owners tend to enjoy.

It is important to exercise these dogs regularly, and their even temperament, if they’re trained and exercised, makes them one of the most desirable breeds around.

These dogs have been referred to as the rising star when it comes to offshoot breeds related to the regular-sized Australian Shepherd. It’s easy to see why, too.

Their cuteness factor is off the charts, so much so that they’ve become incredibly popular on social media.

The combination of blue or brown eyes and multicolored coats makes them truly adorable, which makes them popular among breeders as well.

Their origins are just as interesting. Their breed was originally founded in the 1960s by California ranchers, who needed a smaller dog that could easily adapt to their herding demands.

What they came up with was a dog that was smart, loyal and energetic, yet easier to handle because of their smaller size.

These ranchers couldn’t know they’d come up with a new canine star among lovers of the breed, but in hindsight it’s not all that hard to understand why that happened.

The cattle dog might be the most unique dog on this list. There are several variations on this intriguingly complex breed, but we’ll focus on Blue Heelers, which is one of the most popular.

Their origins are certainly different. They were originally bred for driving cattle in the Australian Outback, so Blue Heelers and other offshoot cattle dogs were built to stand up to a harsh environment.

They’re also physically different as well. They tend to be stronger than most Australian shepherds and their smaller cousins, and the combination of speed and strength can be startling.

They also have some Dingo blood in their background, which makes them even more unique.

The lack of uniformity in the breed can be both appealing and challenging. Some cattle dogs are high-energy and need tons of exercise, while others are more on the smart, passive side.

“Figuring out” the dog is essential for the owners to have a happy relationship, but the loyalty of these dogs is legendary, so they’re more than worth the effort.

The bearded collies is a cousin of the Old English Sheepdog, and its easy to see why this dog has become so popular.

Starting with the physical appeal—at 50-60 pounds, they’re relatively easy to manage, and it takes no effort at all to fall for those large, expressive eyes.

And of course, there’s that adorable “beard,” which is one of the most distinctive traits of any dog breed.

The physical traits tend to fall right in line with the behavioral tendencies of the breed. Bearded collies are lively and playful, not to mention intelligent and athletic.

The history is impressive, too. Bearded collies date back to the 16th century, when sheepdogs from the Polish lowlands were crossbred with their Scottish cousins, then transported to the UK to do a variety of farm work.

Training-wise, bearded collies can be a bit independent, but with solid training they typically become even-tempered and fun to be around.

No rundown on the traits of a bearded collie would be complete without at least a passing mention about the importance of grooming.

Bearded collies have two types of coats, harsh and soft, and if yours has a soft coat you’ll need to do some brushing and maintenance several times a week.

At first glance, the stumpy, short-legged corgi may seem like an odd addition to this list. What could a dog so different from Australian shepherds have in common with their Aussie cousins?

Plenty, as it turns out. Corgis were originally among the most effective of the herding dogs, to the point where they were originally used to drive cattle in the British Isles.

There are two main varieties, Pembroke and Cardigan Welsh. Cardigan Welsh corgis have larger ears and a slight bigger frame, while the Pembroke variety also have a gene that causes some puppies to be tailless.

Corgis may be small, but they make up for their stature by having big personalities. They’re friendly and outgoing, and because of their herding lineage both varieties can be more than a little territorial.

They are wonderful family pets, however, especially if kids are involved.

The fact that they’re smaller and easier to handle with proper training has led to their increasing popularity in recent years, with some of that spurred by the publicity corgis got when various members of the British royalty took a shine to them.

While corgis do tend to be spirited and active, one important element of ownership is weight control, particularly as the dogs get older.

The combination of a long back and short legs can lead to spinal issues in senior corgis, but this can be handled effectively with a proper diet and regular visits to the vet to assess this issue as the dog ages.