If you’ve taken the time to Google “Labrador,” then you’ve probably come across the distinction between lab breeds as either English or American.

If not, no big deal, because this article is going to break it down for you.

But, what even is a “Labrador”? Labrador or Labrador Retrievers are a breed of dog used in many different forms of labor.

They have always worked closely with human counterparts assisting in jobs like hunting, herding, and even rescue operations.

These dogs are typically regarded as excellent and loyal pets. Among owners and breeders, the distinction between American and English is relatively standard, but are they different?

To get to the bottom of this, we must first recognize that American and English Labradors are essentially the same breed.

There is no verified difference between the two breeds biologically, but these terms are broadly accepted among breeders and owners alike.

If you are interested in seeing how similar they are view our article on English Labs vs American Labs.

English Labrador, as defined by Merriam-Webster, is “any of a breed of medium-sized strongly built retrievers largely developed in England from stock originating in Newfoundland and having a short, dense black, yellow, or chocolate coat and a thick rounded tail.”

If you feel like this description is exactly the same as every other lab you have ever seen, then you’re right.

The distinction comes in two forms — nation of origin and purpose for breeding. Traditionally, American Labradors are bred for hunting as labs are technically retrievers.

In contrast, English Labradors are bred for show and conformation.

What makes these terms all the more confusing is that American Labs are often used in shows, and English Labradors are used in hunting and other field trials.

Is There a Difference in Breed Standards? 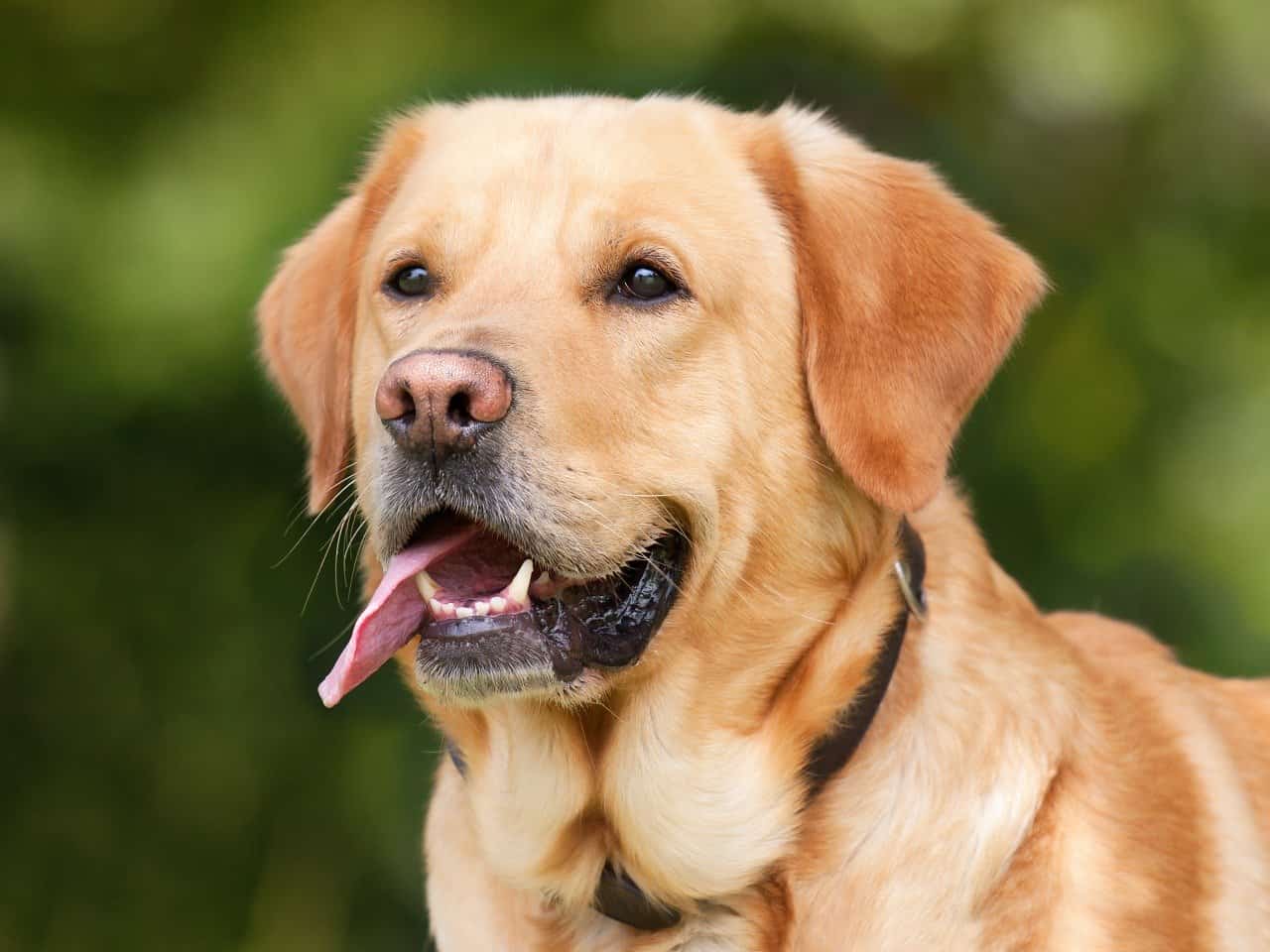 No legitimate national registry, including the UK Kennel Club and the AKC, acknowledges a difference in breed standards.

There is no ‘official’ difference between American and English Labradors. Only one standard exists and that the Labrador Retriever.

The only visible discrepancy, of any kind, between the two, is height standard.

The American height standard allows a height of 21.5 to 24.5 inches.

The English Labrador height standard provides for a range of 21.5 to 22. 5 inches.

If There’s No Official Difference, Why Make the Distinction at All?

While the standards boards may refuse to acknowledge a difference between these two variations of the breed, there several consistent cosmetic differences.

When the two types are put side-by-side, owners and breed enthusiasts tend to identify the following differences in physical appearance.

Bulkier frame with a barrel chest. They are noticeably thicker and more solid-looking.
Their heads are generally wider with a better-defined stop.

They have fuller faces and a shorter muzzle, which typically adds to their overall blocky appearance.

The American lab has, on average, a noticeably slimmer, more athletic-looking build.

They have more sharply angled features with a slimmer face and head, giving the snout a much longer appearance.

As they tend to be bred for workability rather than show, they are often further from the breed standard.

Which Labrador Is The Most Energetic?

The general rule seems to be that the American labs, having been bred for field trials and outdoor work, have a much higher energy level.

For anyone who has never owned a dog, this translates to a dog that is more likely to need lots of exercise.

Big, high-energy dogs need to be worked, otherwise, their energy will get the better of them, and they may do damage to your belongings.

This may also, and this is less likely, result in a temperamental dog that exhibits mood swings and other personality disorders from lack of stimulation.

American labs are considered highly intelligent and can be headstrong.

This is not to suggest that they are more aggressive only that they require a more consistent and regimented routine of work and exercise.

Because of this, they require an experienced owner who is prepared to give them the attention they need.

While the American lab is a perfectly lovely dog, their high-energy does tend to make them less suited as a relaxed family pet.

What To Expect From Your English Labrador 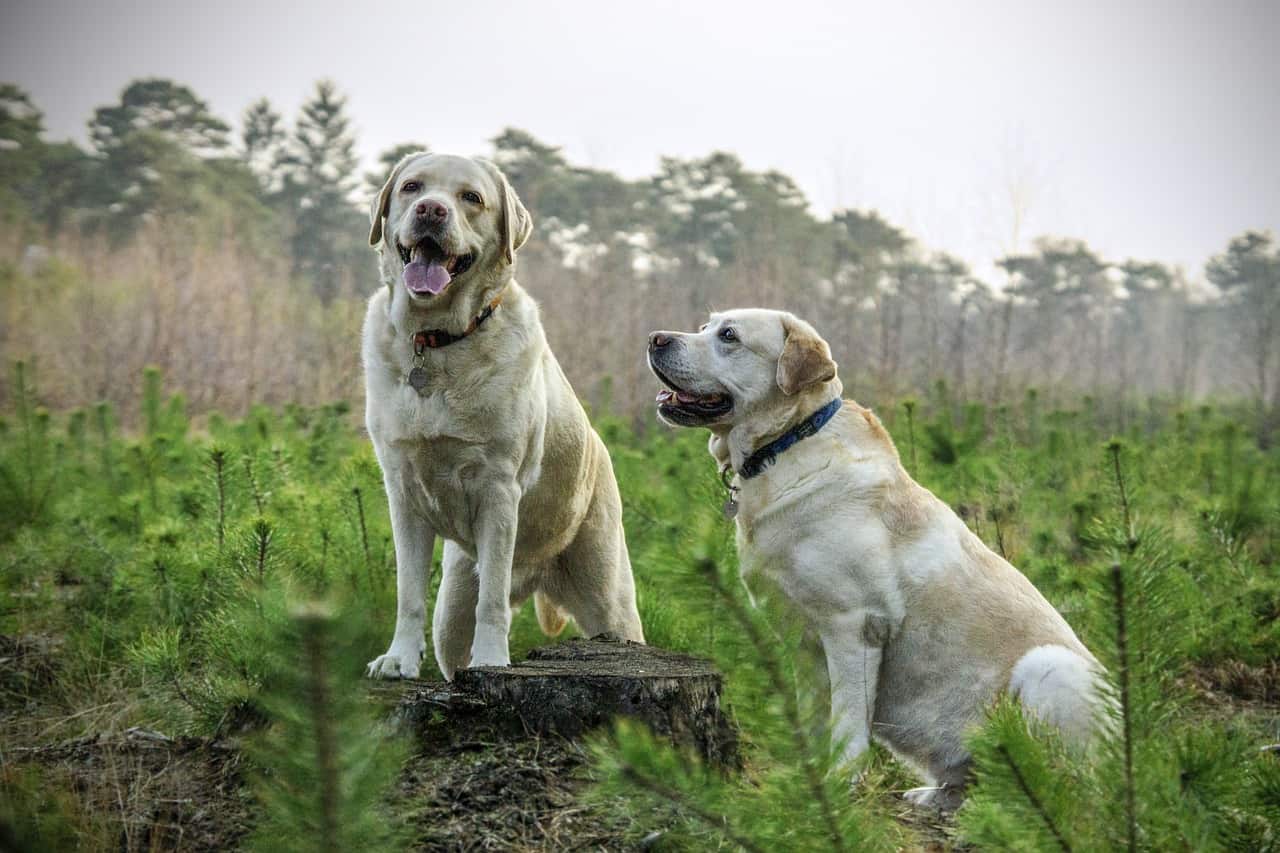 English labs tend to have a calmer demeanor. They are typically less active throughout the day and have a quieter disposition than their American cousins.

Their milder disposition lends them to take better to training than the American variety.

A more laidback owner would have faster and greater results in working with an English Labrador.

While they are more relaxed, these Brits still have plenty of energy to play.

They love to go on walks, play fetch, and run around the yard, but when the hard day’s done, they usually like nothing better than to curl up at your feet and chill out.

This mellow vibe makes the English Labrador well-suited for the role of the family pet.

No matter the child’s age or the number of children, these dogs respond well to them and have plenty of love to go around.

No matter which variety of lab you eventually settle on, labs are labs.

Whether American or English, we can rely on labs to be unquestioningly loyal, obedient, intelligent companions who are always keen to please.

Labs are very kind in nature, full of boldness and confidence while exhibiting any aggressive tendencies.

However, the difference in the energy level of the two types is worth considering when making your selection.

Considering the time required in training and whether you are willing to spend it is important.

Are There Any Common Medical Issues With English Labradors?

Dogs, like people, are susceptible to all kinds of different medical issues.

Some people are genetically predisposed to certain types of cancer or diabetes, and certain professions lead to specific injuries that consistent amongst their workers. This is similar to dog breeds.

Hip Dysplasia- This is to be expected with most large dog breeds. Labrador Retrievers are no exception and therefore are susceptible to this condition.

Hip dysplasia contributes to early signs of arthritis. These signs typically include limping or pain when going up and down stairs.

Many breeders will have their dogs certified through the Orthopedic Foundation for Animals, or another official entity, to ensure that hip dysplasia is not present.

However, in my own experience, this certification is not always a one hundred percent guarantee.

Laryngeal Paralysis- The condition is caused by a change in the muscles in or around the larynx. Laryngeal paralysis causes an impairment to the dog’s breathing through a restriction of airflow in the larynx.

Normal clinical signs may include a change in the dog’s bark (typically a honking sound), harsh or ragged breathing, and an intolerance of exercise.

Arthritis- Again, arthritis is fairly common amongst large-breed dogs. It is most commonly found in older English Labradors due to their bulk and the pressure on their joints.

The most important thing to remember is to monitor your dog’s weight. Just like with overweight people, the extra pounds produce excess pressure in the joints.

Helping your pet maintain a healthy weight is beneficial not only for the pet but for the owner as well. Recommended exercise would be taking long walks or playing fetch.

Keeping an eye on what they’re eating is also important.

Hypothyroidism- English Labradors are known for their chunky frame, but hypothyroidism is a very real problem among these pups. 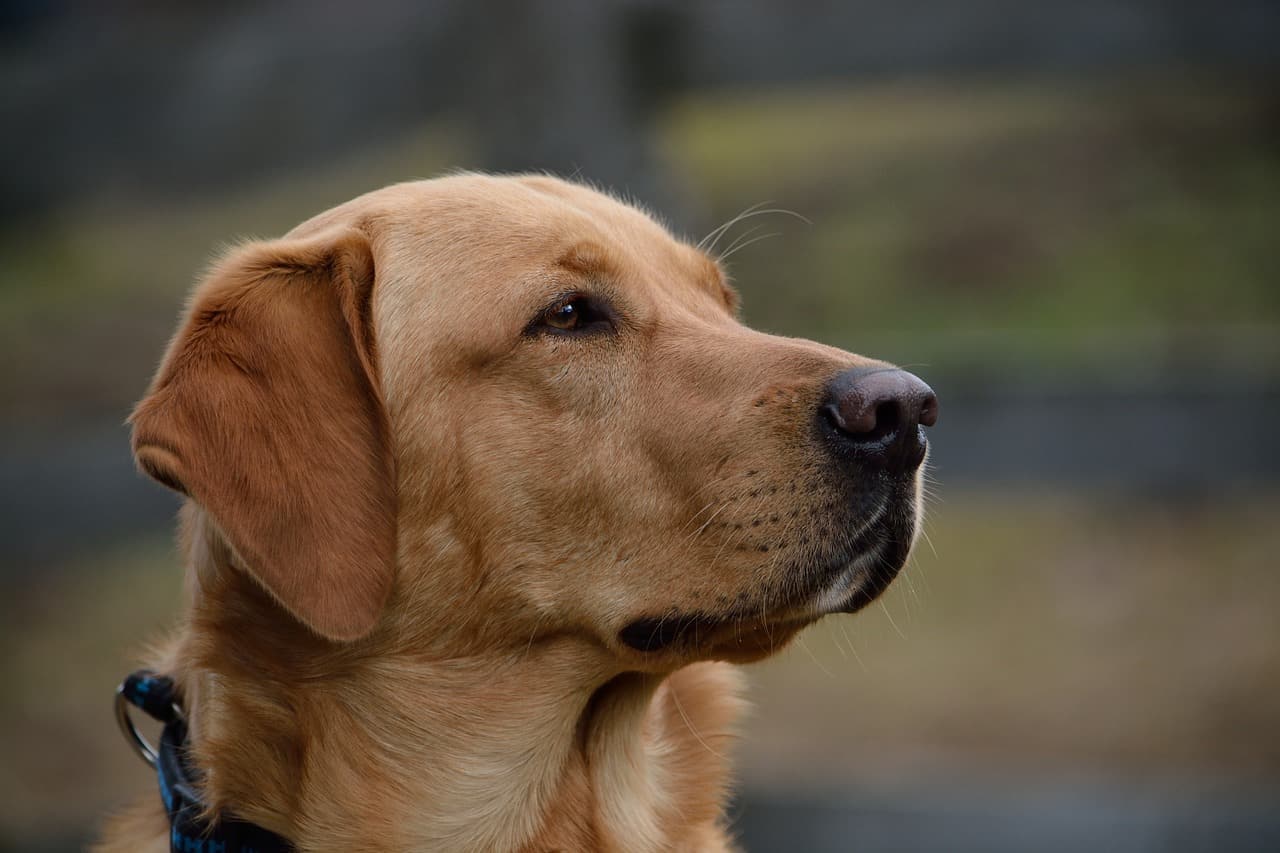 It is classed as an endocrine disorder resulting from lower production of the T3 and T4 hormones.

Hypothyroidism announces itself in the form of excess weight gain, hair loss, intolerance to cold, and lethargy or laziness.

A blood test will be required for a proper diagnosis.

Elbow Dysplasia- This abnormality is usually present from birth and is diagnosed early.

Elbow dysplasia is caused by abnormal growth and development of the elbow joint.

This can lead to lameness in the forelimbs, pain in the joint, and limited range of motion.

Seizures- English Labradors are somewhat predisposed to have seizures.
This condition is caused by a range of underlying factors.

These factors may be anything from a mass on the brain, electrolyte or metabolic disturbances, and exposure to any number of toxins.

Tragically, not all causes can be precisely determined.

In the event that your veterinarian is unable to detect the cause of the seizures, they may diagnose your dog with idiopathic epilepsy, which is a fancy way of saying that they don’t know what is causing the seizures.

Cancer- The Veterinary Cancer Center lists cancer as the number one natural cause of death in cats and dogs, accounting for nearly fifty percent of all deaths each year.

If this statistic scares you, you are not alone, but there have been many advancements in science and medicine.

The veterinary field has discovered a number of promising treatment and therapy options.

The most common cancers among English Labradors include osteosarcoma (bone cancer), lymphoma, and mast cell tumors.

Common symptoms to watch for include abnormal/inexplicable weight loss, lack of or loss of appetite, vomiting, and development of lumps on the body.

If you notice any of these, consult or visit your vet. They’ll be able to run some tests and confirm.

English Labradors are specially bred for looks and will be stunning in all of your Instagram photos.

That Christmas card you were planning on sending just got a million times cuter.

Perhaps a couple of reasons that have not been previously covered might be that English labs are bred to have the closest looks and temperament to the breed standard.

So, if you ever intended to show your lab in competition, the English variety would be best. 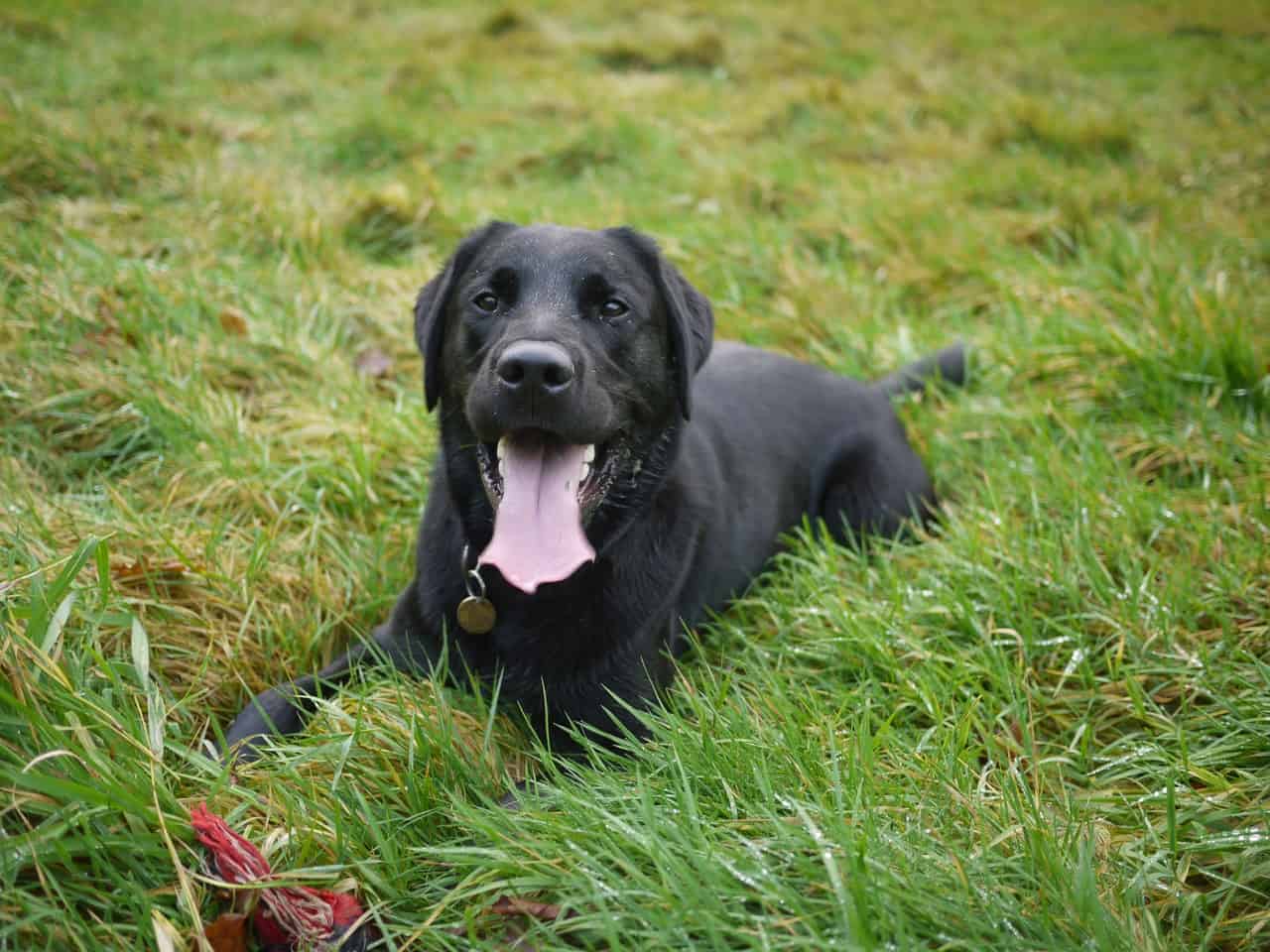 The same could be said for purposes of breeding as well. The English variety will typically receive top billing.

All-in-all, English Labradors are fantastic dogs. They are loving and energetic enough to keep up with you on long walks and even your morning jog.

These thickset pups are certainly exuberant as puppies but tend to chillout much faster than the American lab and take to training much quicker.

Their cuddly disposition makes them ideal family pets for a family at any stage and of any size.

English Labradors are intelligent dogs that learn quickly and are eager to please their owners.

Fantastic dogs they may be, but they are not a super special, unique breed of dog.

As Labrador Retrievers, English Labs are at risk for all the same health issues as any other.

Hip and elbow problems can be crippling to the spirit of a dog who loves nothing more than to run with their big pink tongue flailing in the breeze.

Cancer can be crippling to the owners who love them, but these risks are no less with any other breed of dog.

Whether black, yellow, or chocolate, they’re all just English Labradors.

They are all fantastic dogs with their own unique personalities that bred for their looks and disposition.

If you already own or decide to purchase an English Labrador, prepare yourself for hours and hours of love and companionship, some trying moments, and triumphant successes.

Their intelligence is evident in the way they seem to anticipate your needs and always do their best to please.

You and your English Labrador will cherish all the moments you spend together and you will build memories that will bring a smile to your face for years to come.