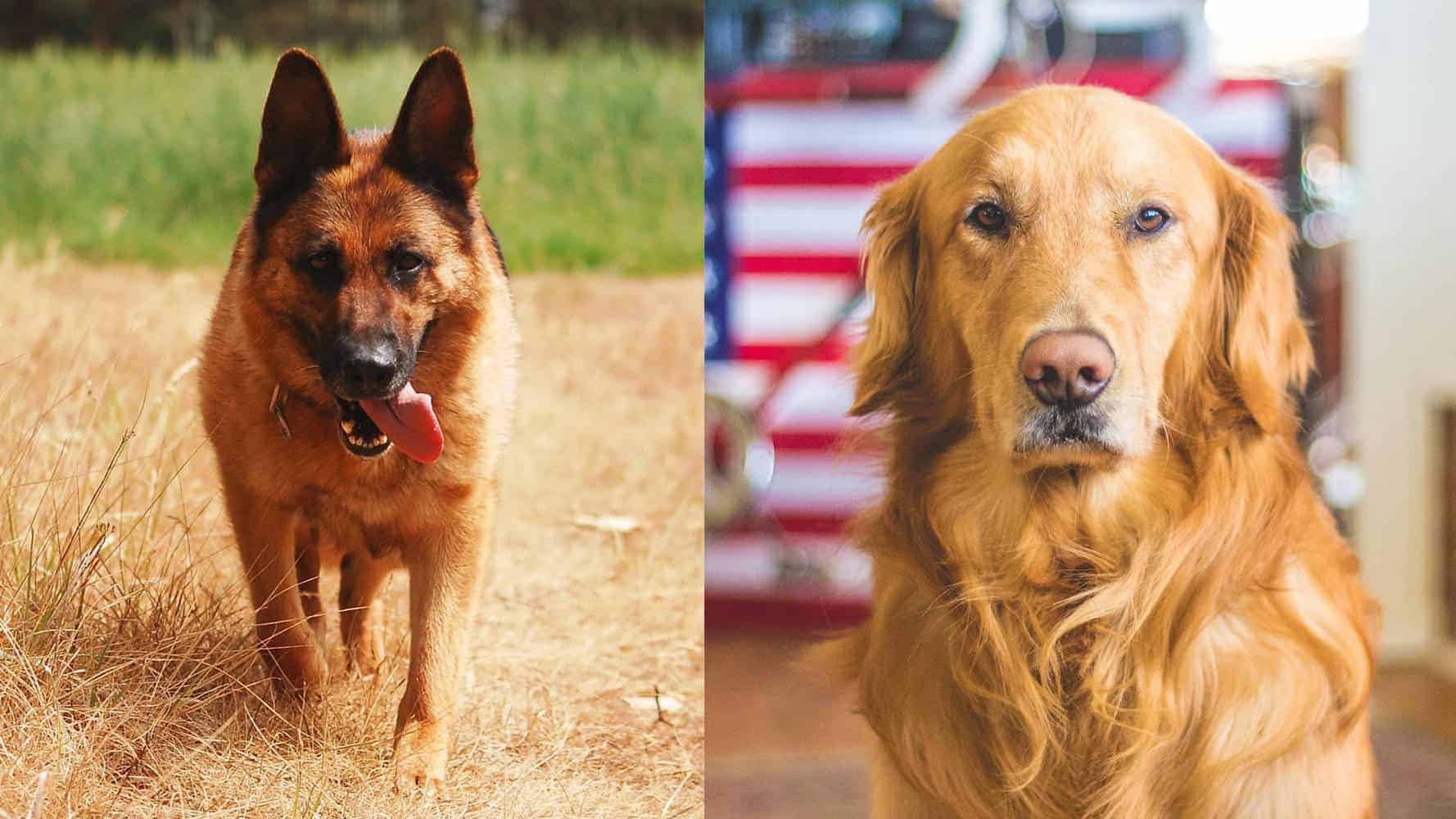 Are you looking for a new dog for your family? If you are, and you’re looking for a slightly larger breed, you might be debating on a Golden Retriever vs. German Shepherd.

Each of these dogs is beautiful and they each have some great features, but you’re going to want to look closer at some of the finer points to find the right one for your home.

Where They Come From

The Golden Retriever comes from Scotland, and specifically from the estate of Sir Dudley Majoribanks who was involved in breeding many types of animals.

Somewhere around 1868 to 1871, he managed to breed what he dubbed the Tweed Water Spaniel, which is considered one of the original ancestors of the Golden Retriever.

His goal was to create a dog that would be good for waterfowl hunting and in that he definitely succeeded. The Golden Retriever official joined the Kennel Club with its own designation in 1911.

The German Shepherd actually has a relatively short history from the time that it came into being in approximately 1899 in Germany.

Captain Max von Stephanitzwas looking for a herding dog that would be better than anything that those in other parts of the world had.

He started breeding dogs when he retired from the military and the German Shepherd was started from a single dog that he was captivated by at a dog show.

As he started to breed the dog he changed his mind on the purpose, deciding that his new breed would be used for military and police work and he succeeded in getting the German Shepherd into the military during World War I.

The look of a Golden Retriever is something that you probably know something about.

Even if you’ve never had one for yourself you’ve likely seen them and that long, golden coat that gives them their name is definitely hard to miss.

They have a larger head and short ears as well as a straight muzzle, all of which are considered hallmarks of the breed.

The German Shepherd is actually considered more popular than the Golden Retriever, coming in as the second most popular breed.

They have two-tone coats that are a mix of tan with patches and areas of black throughout the body.

With males standing about 26” tall and weighing in at up to 90 pounds, these dogs are slightly larger than the Golden Retriever. Females stand up to 24” and can weigh up to 70 pounds.

Both males and females live to be between 7 – 10 years of age, which means they’re not as long-lived as a Retriever.

Not only that but they’re one of the most popular dogs around and that probably won’t surprise you.

They’re extremely obedient and very easy to train. Outgoing, playful and energetic, these are great dogs for the entire family and they’re definitely worthy of your trust as well.

It doesn’t take much to get a Golden Retriever to fall in love with you and be willing to protect you from anything.

When it comes to their personality German Shepherd’s are known for being extremely smart and definitely courageous.

They’re confident and loyal and they’re definitely noble dogs. They’re great around a family because they’re going to be constant for that family.

In fact, they’re excellent protectors (probably why they have a long history with the police and military) and yet they are extremely gentle with their families and loved ones.

These dogs may take a little time to get used to new people or to become more friendly.

Some of the best skills of a Golden Retriever are that it’s a great hunting dog and a great field dog.

They do very well when they have a purpose and to fill. This is likely why they’re also great as guide dogs or for search and rescue.

Not only that but they can be great show dogs because they’re great at things like obedience and they’re definitely competitive.

If you’re looking for a dog that can do it all and still be a great family pet when they’re not working hard, you’re definitely in the right place with a Golden Retriever.

German Shepherd’s are great at learning commands and they’ll definitely be easy to train for anything (again, why they’re good in military and police applications).

Not only that but they’re willing to defend their loved ones no matter what it takes.

That’s definitely going to make them a great animal for those who want protection in case of an emergency.

This dog can run fast and accomplish just about anything that you want it to do.

They’re hard workers and they’re definitely strong enough to push through whatever you need.

Golden Retrievers are going to need a whole lot of outdoor time and they’re going to want a family or an owner that really wants to play.

While they don’t need a whole lot of intense time outdoors, they’re going to have a whole lot of energy and that makes them great for those who have a lot more time.

If you’re not going to have the time to take them outside a lot and let them run and play then a Golden Retriever just might not be the right dog for you or your situation.

They have a lot of energy in fact, which means they need a purpose or they need a family that’s going to get them out and moving.

Even more, the intensity of the play that they need is going to be pretty high, which makes them better for families or younger individuals rather than those who are elderly or even those with small children who might be a little overwhelmed by all that action.

When it comes down to it, you’re going to find that each of these dogs has a great personality, a great look, and definitely some great skills.

That means, when it comes to a Golden Retriever vs German Shepherd you’re going to be the best judge for your family.