A great way to help keep your dog healthy and to get exercise is by playing fetch.

The problem is how to teach a dog to fetch that doesn’t naturally do this. Some dogs like Labradors seem to have a natural instinct for fetching.

Other dogs, on the other hand, seem to have no interest in it at all. By following a few steps, you might be surprised at how easy it is to teach a dog to fetch.

Since you are teaching your dog to fetch, we assume you might need some quick tips on potty training a puppy as well.

Steps For How To Teach A Dog To Fetch

In learning how to teach a dog to fetch, we’ll assume this is entirely new to your dog.

Maybe they have never fetched before, they are just a puppy or have never shown any interest in fetching.

Getting Your Dog To Come

The first concept that your dog will need to understand is how to come to you when called.

There some great tools available that can help in this area. A clicker is one such tool that you can use to help train your dog.

Otherwise, a marker word if no clicker is used can work in its place.

A clicker is a small device that makes a distinctive sound. The sound from the clicker helps let your dog know that they are doing it right.

You can use marker words like “Yes” if you don’t have a clicker to reassure your dog.

Regardless of the method that you choose, reward your dog with treats that they really enjoy.

By using positive reinforcement and following the next few steps, your dog will start understanding how to come to you when called.

Steps For Teaching A Dog To “Come”

Picking The Right Toy To Fetch

The next step is finding a toy they like after they can successfully come when called.

Depending on the type of toy, you can try different methods and see what gets better results.

Some dogs will enjoy toys shaped like balls or a similar small sized toy. Other dogs might enjoy a stuffed toy, or bone or stick.

The main goal is finding a toy that your dog gets excited about. After finding a suitable toy you can try these methods.

Method #1 – Teach A Dog To Fetch With Tug-Of-War

Some dogs have a really hard time getting the basic concept of playing fetch. A great way to introduce this is by playing tug-of-war with your dog.

Using a rope, stick, or stuffed toy works well for this method. To try this method just follow these steps.

Your dog will soon get the idea that bringing the toy back to you will lead to a tug-of-war game.

Method #2 – Teach A Dog To Fetch With “Shaping”

To use the “shaping” method to teach a dog how to fetch, follow these steps.

With both practice and using treats to help reaffirm positive behavior, eventually, your dog will pick up just about anything and place it in your hand when asked.

The main goal when trying to teach a dog how to fetch to show the dog how much fun it is to play with you and a toy.

Getting the dog excited to play with you is just as important as them getting excited about the toy.

By using treats and toys that your dog already likes, you’ll be surprised to find out just how easy it can be to teach a dog to fetch.

Even if they don’t naturally do so on their own, once it becomes a fun game, they will begin to grasp the concept and they’ll be fetching in no time. 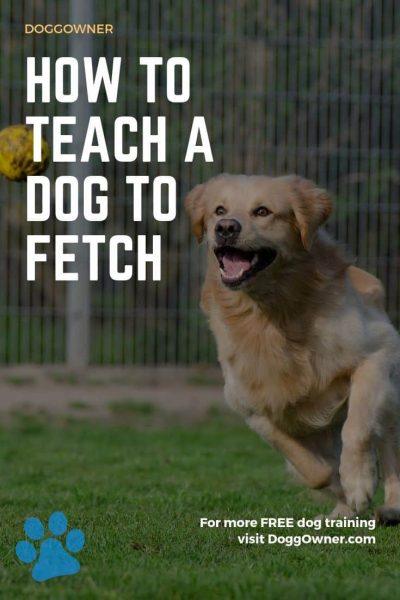 I started this site because I am a dog lover. Most of my social feeds are full of dogs and I am always learning more about them. I also have a lifetime of experience with dogs packed with tactics, tips, and funny stories that I want to share with the world!

link to Does My Poodle Need Another Dog?

Poodles are beautiful creatures – whether you have a toy, standard, miniature, or mix, these beautiful animals are beloved for their intelligence, grace, and companionship. Does your poodle...

Continue Reading
link to Will Huskies Protect You? You May Need To Do This...

When looking to buy a dog and choosing which breed to go with, one of the common factors owners consider is ‘will this breed of dog protect me, my family and my home?’, a characteristic commonly...

I started this site because I am a dog lover. Most of my social feeds are full of dogs and I am always learning more about them. I also have a lifetime of experience with dogs packed with tactics, tips, and funny stories that I want to share with the world!

DoggOwner.com does not intend to provide veterinary advice. We do our best to provide well-researched information about dogs, however, the articles on this blog are no replacement for veterinary guidance. DoggOwner.com is a participant in the Amazon Services LLC Associates Program, an affiliate advertising program which allows us to earn fees by linking to Amazon.com. As an Amazon Associate, we earn from qualifying purchases.