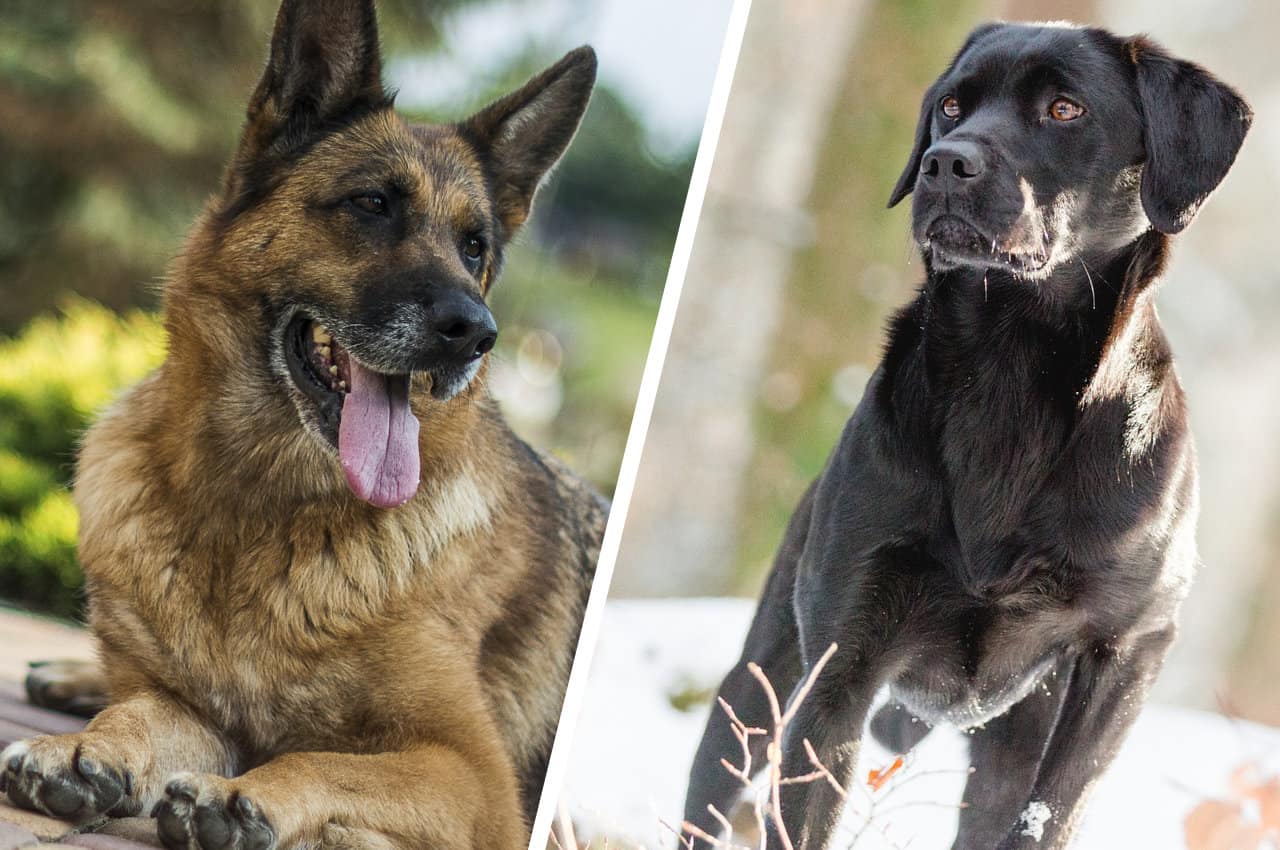 For this article, we will be discussing the differences between the Labrador vs German Shepherd.

This will be done by using different categories to compare the two breeds and how they differ or relate to each other.

I will also add in my own thoughts and opinions to each matter which might help you understand some of the details in this comprehensive breakdown.

For this part, I will discuss how the two breeds of dog came about, what year they were introduced, and what their original purpose was.

Area Introduced: The Labrador was introduced in the province of Newfoundland, Canada by British sailors.

German Shepherds on the other hand were bred in Germany as indicated by the name.

Original Ancestors: The ancestor of the modern-day Labrador Retriever was a dog called the St John’s Dog, native to Newfoundland.

While it is presumed that German Shepherd’s ancestors are actually wolfdogs.

Why It Was Introduced: The Labrador was bred to retrieve fish for fishermen from the coastal waters.

German Shepherds on the other hand were bred to herd sheep and also to protect these flocks from potential predators on farms.

My Own Thoughts: From the information given above, it seems to be that these two particular dogs were bred for work purposes with the two breeds doing very well for whatever job they were bred for. Even today, we still see that this is the case.

German Shepherds for example are used by law enforcement in airports. This type of support is still vital and important as these dogs are able to do tasks at a faster pace.

Here, I will discuss the physical traits that make up each of the dog breeds, such as weight and color.

Coats/Fur: Labradors are distinct for their double-coated fur which means they have two layers of fur underneath.

Likewise, German Shepherds are also double coated as well. Length does differ though among each type.

Coat Color: Labradors come in a range of colors which includes black, brown and yellow. Yellow being the most dominant.

Likewise, German Shepherds also come in a variety of different colors including black and tan, black and red (light), sable or gray, black and the last one, white.

Black and tan usually the more dominant color in this category.

If the dog is brown, the eye color is usually brown or hazel. In German Shepherds, the dominant color is brown. There are also cases of these dogs having blue eyes.

Size/Weight: Labradors can range in weight anywhere from 55-80 pounds which includes both male and female adult dogs.

However, German Shepherds are generally heavier on average. The typical weight ranging anywhere from 48-88 pounds for both genders.

My Own Thoughts: Both of these dogs have a wide variety of physical traits which distinguishes them from one another.

However, it is up to the owner as to which one of these dogs they would prefer.

For this section, I will discuss the personality of each dog and how they compare with each other.

Good Personality: Labradors are usually playful, easy-going dogs that gets on well with both people and animals. German Shepherds however can be more aloof dogs.

It takes time to build trust with German Shepherds, but once they do, they can be easy-going and approachable once this relationship is formed.

Bad Personality: In general, Labradors are actually quite a friendly dog but there are some of these dogs that can have behavioral issues.

Symptoms include excessive barking and mouthing and biting.

German Shepherds on the other hand can be more aggressive dogs and the symptoms include barking, mouthing, and biting as well.

My Own Thoughts: For first-time buyers, it is generally better to get a Labrador.

Because of its even-tempered, it is a much easier dog to take care of, especially if you have not got any experience in the past.

However, German Shepherds can be more aggressive. Also, as it takes time to build trust with these breeds.

It is best to avoid getting this dog unless you know how to deal with a difficult situation that puts you in a position.

For this section, I will discuss the various grooming methods used for both dogs.

Bathing: Because of their short coat, a Labrador should only need to be bathed a few times a year.

In comparison, German Shepherds should only be bathed once every three months since they are naturally clean and odor-free.

Brushing: Labradors are notorious for shedding their fur so it is best that they are brushed frequently.

This applies to the German Shepherd as well, where it is recommended to brush them at least twice a week and every day during spring and fall where shedding fur heavily normally occurs.

Cleaning Ears: Cleaning Labradors’ ears is a given, considering that they have poor ear health and are more prone to infection.

German Shepherds are less susceptible to infection, but it is still important to clean their ears as well.

My Own Thoughts: Grooming any dog should be a priority for any owner.

However, other things should be taken into consideration such as knowing the correct knowledge to groom your dog, correct supplies needed, and methods used in an orderly way.

So, if you don’t have any knowledge of this, it is best to research it.

Here, I will discuss the most common health problem for both Labradors and German Shepherds.

All dogs have potential health issues, but it is the most common issue linked to a specific dog that should be noticed.

Health Issues: One of the most common health problems for Labradors is cancer.

In German Shepherds, however, hip dysplasia is the number one health issue and it can affect their long-term mobility.

My Own Thoughts: It should be noted that if dog owners notice anything out of the usual happening with either of these breeds, then symptoms should be identified.

Not only will this help to identify and treat the potential health issue. It will also allow the owner to save up for medical costs if need be.

Both the Labrador and German Shepherd have different climate preferences which I will discuss.

Hot/Tropical Climate: Labradors are able to sustain being in tropical or hot climates.

German Shepherds can tolerate hot or tropical climates just as long as they are provided with shade and water as well.

Cold/Temperate Climate: On the other hand, Labradors are not good at dealing with cold weather.

Likewise, the German Shepherd is well adjusted in dealing with cold weather.

My Own Thoughts: When looking at each of these dog’s climate preferences.

It is important to consider what their use is intending to be, whether it is a working dog or a family dog.

So, if I was faced with this choice and I needed a specific work dog, I would keep in mind its suitability for both climates.

However, if it is a family dog, its suitability for both climates may not be so important. This is just my own opinion.

Labradors and German Shepherds differ in terms of the intelligence they show on a daily basis. This impacts their daily lives.

Intelligence Rank: Out of 138 breeds of dog tested, Labradors were placed as the seventh brightest dog on the list.

German Shepherds, however, did slightly better, where they are considered the third brightest dog breed.

Intelligence Traits: The Labrador’s keen ability to learn, its emotional attachment to people and working attitude make it an ideal working dog.

The German Shepherd as well is noted for its agility, loyalty, athleticism, and hard-working attitude, which makes it ideal as well.

Suitable Tasks: The Labrador’s intelligence traits make it suitable to do tasks such as search and rescue, detection, and therapy work.

While the German Shepherd makes this dog suitable for tracking, search and rescue and bomb/drug sniffing work in airports.

My Own Thoughts: Both of these dogs are intelligent and hard-working. However, it is best to research each of these dogs thoroughly to make sure that they can work on the tasks.

So, if I needed disability assistance, for example, the Labrador would be my first bet, simply because of the easy bond it has and emotional attachment.

Similarly, this is why law and security enforcement pick German Shepherds as they have superior sniffing skills. The choice however is entirely up to you.

Here, I will discuss the shedding periods for both Labradors and German Shepherds.

How Often Do They Shed: Labradors shed regularly throughout the year. The same can be said for the German Shepherd breed as well.

My Own Thoughts: Whichever dog you may decide to get, it is important to keep in mind that shedding will be a recurring period for the dog.

It is best to invest in a good quality brush and vacuum cleaner to lessen the impact of shedding on the household and to hoover up any of the fur that is left over.

Here, I will discuss the relationships these two breeds have with people and animals.

Relationships with Cats: Labradors are known for their gentleness and kindness which means they get on well with everyone including cats.

Likewise, German Shepherds get on naturally with cats as well. Though there are some that may act too shy or aggressive towards them,

Relationships with Kids: Because Labradors are considered a family-friendly dog, they get on very well with kids of all ages.

Raising a German Shepherd puppy alongside your kids means that they will be loyal and protective towards them.

Relationships with Other Dogs: Labradors get on well with other dogs, particularly the Golden Retriever. Most German Shepherds however get on great with other dogs.

But there have been cases where some have been aggressive towards other dogs, particularly if they are the same sex.

Relationships with Adults: Again, Labradors are friendly to anybody they meet, including adults. German Shepherds however can be more reserved and territorial towards adults.

It is best to build a good relationship with them first.

Relationships with Strangers: Even when meeting new people, Labradors have a tendency to show their friendly side. German Shepherds can be more aloof or suspicious of them.

Relationships with Other Animals Like Rabbits: Labradors are very tolerant when meeting new animals. German Shepherds also naturally get on with new animals.

We have an article on are German Shepherds good with cats for more information on that topic.

My Own Thoughts: Most of the time, how these dogs react to people and animals depends on how well they were trained and socialized by their owners.

This can have an impact on future relationships as I have found from my own experience.

Here, I will discuss the difference in temperament between the two breeds.

Temperament: Labradors are considered one of the friendliest dog breeds. They are gentle, out-going, even-tempered, kind, and intelligent.

German Shepherds are more alert to their surroundings. They are courageous, alert, loyal, and obedient.

My Own Thoughts: In order for the dog’s temperament to stay at an even pace, it should be encouraged that proper care is taken on a daily basis which includes exercise, proper feeding, etc.

Now that the comparisons between the Labrador vs German Shepherd has been made, it is time to finish up this article.

There are both pros and cons to the Labradors and the German Shepherds, which makes them both equally as good pets to keep for whatever purpose the owner wishes.