Roman Rottweiler: What Is This Breed All About? 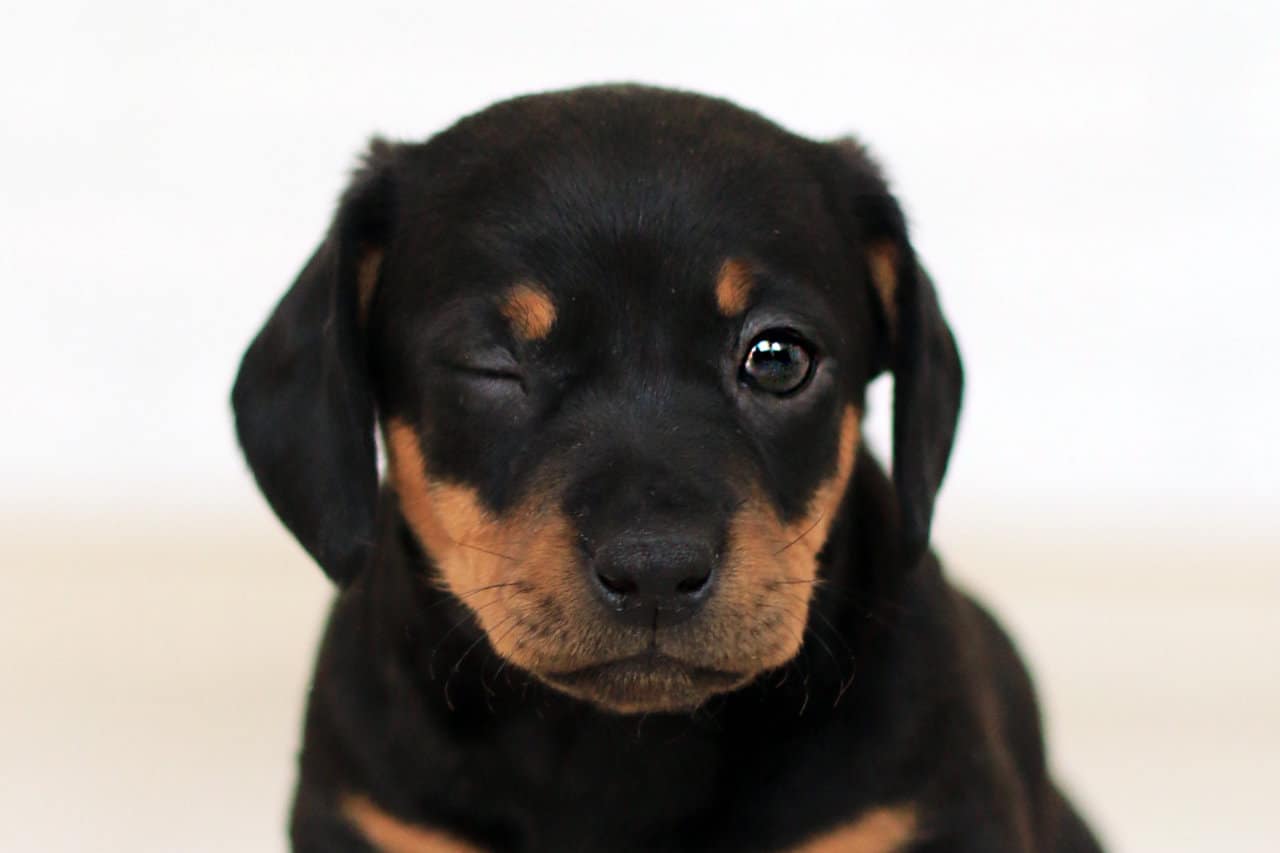 Before their appearance in Rottweil, the Rottweiler came from the Roman Empire, where its direct ancestor is the Roman Shepherd.

In the hopes of recovering some of the most desirable characteristics of its father breed, the Roman Rottweiler stands out from the other variants because of its considerable size, rugged looks, and noble behavior.

Learn more about this unique breed in this article.

What Are Roman Rottweilers And What Are They Like?

The origins of the Roman Rottweiler

Roman Rottweilers are large dogs, so it is generally recognized as a recreation of the descendants of the Tibetan mastiff and even the Italian mastiff.

The first time information about them appears, in writing, was in 74 A.D.

This particular breed was used mainly in the mountainous areas during the Middle Ages.

The Romans were their main masters; they designated activities like protecting or moving cattle because they were dogs of intimidating size; besides, they were intelligent, healthy, and always willing to work.

These dogs showed physical and mental abilities that qualified them as the best breed to perform in the mountains.

The Roman Rottweiler is recognized as the original Rottweiler because the German and American Rottweiler descends from it. These Rottweilers arrived in Europe with the legions of Roman invaders.

Over the years, they were left as “escorts” of the cattle in some settlements of German territory, so some Germans took over a few copies of the breed.

These areas of settlement, over the years, became Roman territory. One of these territories was Rottweil, built-in 74 A.D.

In Rottweil, Rottweilers have designated activities such as herding and caring for cattle, maintaining order in the herd, taming, and making the most rebellious bulls move.

Although there were also more difficult tasks for them, such as protecting their master and their master’s property, in some cases, some Rottweilers had their master’s money tied around their neck to keep it well guarded.

Later, when the Germans appropriated some Rottweiler specimens, they began their breeding and reproduction, and even their modification, because the Germans were looking for a dog with the fierceness of the Rottweiler, but smaller and shorter.

Others wanted to preserve the original Rottweiler and the power, guarding skills, transportation, and effective game hunting skills of this big dog.

The Roman or giant Rottweiler is not a type of Rottweiler, but a large specimen that has been selectively bred to look more like a mastiff.

The term Roman rottweiler or “rottweiler king” is often a sales gimmick of unethical breeders. To offer this rottweiler breed as a more appealing alternative.

The increase in size in these specimens not only does not adhere to the breed standard but also brings negative consequences for the dog’s long-term health. Giant Rotties are known to be prone to hip dysplasia and other orthopedic problems.

In terms of size, the American Rottweiler is superior to the German Rottweiler, because its size ranges between 68 and 69 centimeters in height; the same goes for the approximate weight of an adult American, where they typically weigh up to 80 kilos.

This weight is achievable as long as the dog is well fed and cared for without being overweight.

The Roman Rottweiler is a great dog. Generally, it stands out due to its broad head, coming from a big and wide skull, unlike the other two, and for its distinctive wrinkles.

In general, its appearance is of a very robust dog, sporting a broad muzzle and back, well separated and well-marked ears in front, dark-colored mouth with 42 teeth that should form a scissor bite.

Its back and chest are also vast, and its neck is slightly arched while its legs are compact.

Its tail can be cut, as long as one or two vertebrae are left, but this activity is nowadays forbidden among many clubs and breeders, hence it is common to leave it as-is.

Many ask themselves: so why does the Roman Rottie look different from the American or German one? Its head is broad, its bones are thicker, and the body is significantly more robust.

The typical American Rottweiler may have a more slender appearance, with long legs and a smaller head than the broad head that characterizes the German dog.

The German Rottweiler differs from the American and Roman rottweilers by having a long tail and a slightly shorter muzzle, more robust body, coarse and compact, and smaller stature.

Among other particularities, the American Rottweiler has been characterized by a shorter line and a longer muzzle, with a larger body and greater strength, but retaining its style and elegance.

The coat of the Roman Rottweiler is usually thick and can vary from smooth to plush; either can be considered acceptable. Some owners of these dogs may prefer them shaved, it can be long, but it is not a common sight.

Generally, the Rottie will be more comfortable with a short coat since its skin can protect it very well from cold weather. A thick, luxurious coat is desirable for a Rottie who works as a guardian.

But not only do they differ in their physical features, but they can also have very noticeable personality differences.

As it is well known, the Rottweiler is a dog with a safe and reliable behavior, always alert to what happens around it, and keeping an eye on everything that happens.

The Rottweiler, generally, is a calm, safe, loving, brave, and not at all shy dog.

It is not used to making friends quickly with unknown people. They are a highly intuitive dog that resorts to the wait and behaves with new people according to the stranger’s behavior with them.

However, with the family, he behaves in a very loving and affectionate way, usually following the family everywhere in the house.

It is not a dog that overexcites easily and has a strong inherent desire of protection with its family and its property; however, it rarely becomes aggressive against the other people without cause.

Rottweilers are a smart, adaptable breed with a hard work ethic that is practically embedded in their DNA. It is important to know that the Roman Rottweiler has a born sense of leadership, with a well-defined character.

When taken as a pet, it must be treated as a member of the family, but the hierarchy must be very well defined; that is, the Rottweiler must know and recognize that the humans in the family are the leaders of the herd.

The differences in temperament are even more noticeable according to the gender of the animal.

The males, generally more silent and observant, keep watching the surroundings for possible threats, evaluating the territory in which they operate.

The females, on the other hand, are usually easier to control and are more affectionate, yet they are generally protective and attentive when defending their own.

Both genders are easy to train; from the time they are puppies, but they can become quite stubborn. However, they always stand out for their great obedience and capacity to adapt.

A Roman Rottweiler can live between 10 and 12 years.

Females can have between 10 and 12 puppies per litter.

They may have anxiety when being in the presence of people and strange animals to their environment. Therefore, they may act aggressively if they don’t know better. Early sociability will prevent this.

These are some of the reasons why a rottweiler can be aggressive. However, they will not be the only ones; the essential thing is not to tolerate this type of behavior and conduct.

It is necessary to be willing to educate and correct when necessary, without resorting to mistreatment or violence since these dogs are usually brilliant.

The Roman Rottweiler is a highly intelligent dog, so it will not be necessary to repeat the orders thousands of times for it to obey; on the contrary, training it will be easy as long as the master has the character required and leadership for the animal’s obedience.

First of all, it is necessary to be firm when giving orders, not to lose control, or let the dog be the one who commands.

It is essential to show your Rottie that the one who feeds it is the master and leader of the pack. Therefore, the person should not be weak in character. Consequently, the dog will be the leader and will command.

Don’t resort to violence under any circumstances. You should not educate your Rottie by hitting it because it will internalize and copy your aggressive behavior.

It is necessary to put limits on your Roman Rottie since it is a puppy, and never accept bad habits and behaviors.

Your Rottie should not spend many hours tied up, only when you have visitors or small children because it may attack them.

The best solution is to train the dog from puppy to be loose with the family, giving it affection to socialize with everyone.

Be aware that it is a dog, an animal that does not possess the same human reasoning. Otherwise, it will guard its territory and interpret children as being below its rank.

Rottweilers and other small animals, can they live together?

A Roman Rottweiler and a small pet, such as a cat or a guinea pig can live together in the same house.

The main thing is to make them socialize from the moment they are puppies so that they get used to their different smells and activities.

At first, the idea is separating their spaces and then bringing them closer together with little by little; to encourage supervised encounters and to watch them when they are together to appreciate their behavior, although eventually, they will get along well.

For many, a Rottweiler can be intimidating. Even in movies, they have come to associate it with devilish or aggressive dogs.

However, a Rottweiler, especially a Roman Rottweiler, should not fool you. Although it has a large size, its personality and affection can be the same as a Poodle.

Consider that, officially, there are no significant differences between the different types of Rottweilers.

From the experts’ point of view, there are only two types of rottweilers: those who have been responsibly trained and those who have not. The kind of Rottweiler is a denomination based merely on the country of origin.