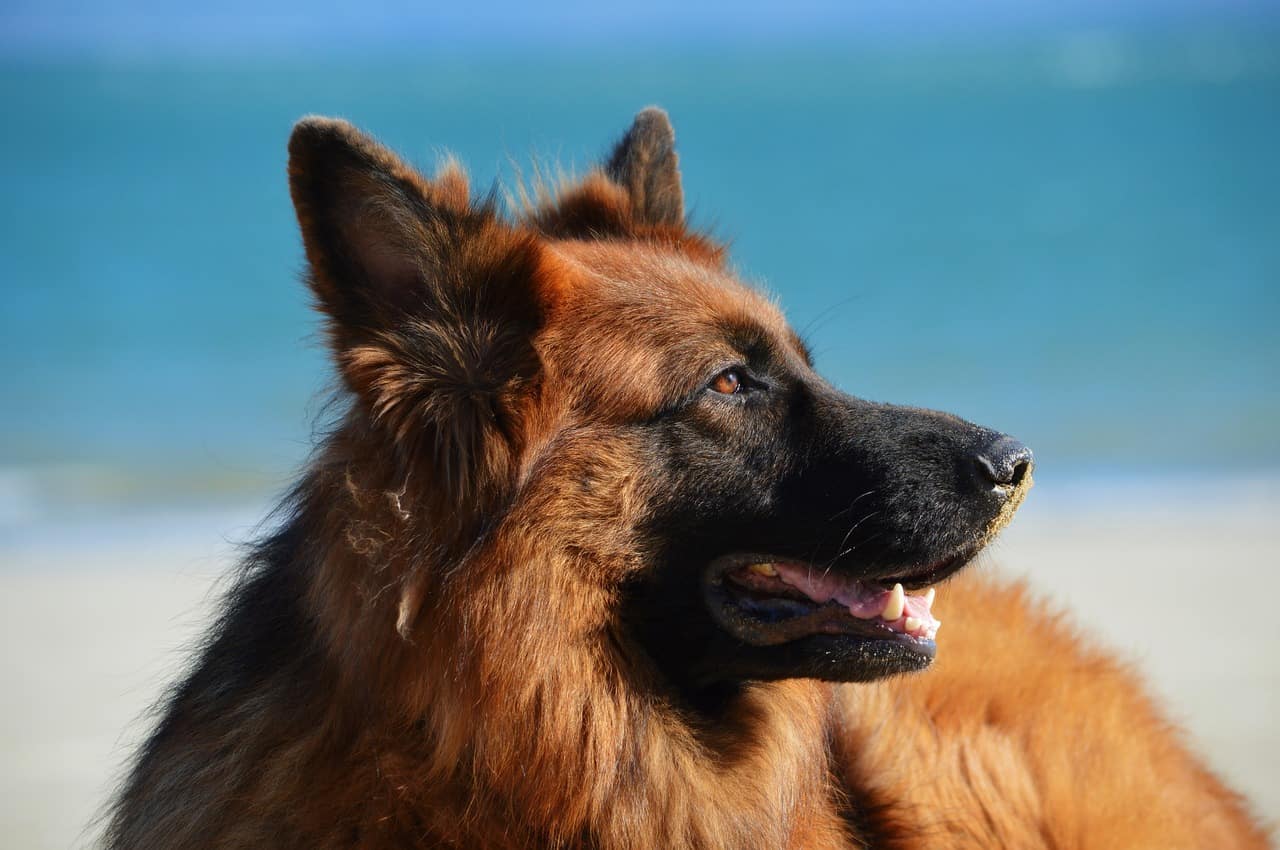 If you’re looking for a new dog to add to your family you probably want one that’s going to feel just like part of the family.

And maybe you want a strong dog that’s going to act as a protector for your entire family.

If you are looking for the strongest dog breeds, what exactly should you be looking out for?

What Are The Strongest Dog Breeds?

If you were thinking about the strongest dogs this is probably one of them that came to mind.

After all, they’re not used by the military, law enforcement, and security for nothing. German Shepherds are known for being tough.

Not only that but they’re extremely smart, which really makes them a great pick for protection.

These dogs are fast and if they want to take you down they’re definitely going to do it. But that’s not all there is to them.

These dogs are also very beautiful and they’re extremely loyal.

They’re also calm and caring in general, though with one of these dogs in your family, nothing is going to get to you without getting through them first.

If you’ve ever watched the Iditarod on TV then you’ve seen Siberian Huskies in action.

These dogs are considered medium-sized, but they’re definitely tough. They can pull a full sleigh filled with people and supplies (as a team of course).

The entire body of this dog is covered with muscle and they are definitely not afraid to use it.

Even better, they have the power to back up that strength, which means that not only can they get up and go, but they can do it for a long time and through any kind of weather (you think the weather in Siberia is nice?).

Great with children and with other dogs, the Siberian Husky tends to do better in cool to cold climates.

They look beautiful and the thick fur definitely keeps them warm if you live in a cooler area of the world, but too warm in hot temperature zones.

If you end up getting a Siberian Husky, we have a list that covers the best shampoo for their breed!

Looking for a dog that’s small but still plenty strong? The English Bulldog is definitely where you’re going to find it. This dog is all muscle (and no fur to cover it up).

They’re also super dedicated because they were actually bred to help take down bulls.

Could you imagine a little dog like this taking down a raging bull? But they absolutely will do whatever they need to.

They’re not afraid of anything and they’re not going to back down from a challenge.

The English Bulldog is extremely gentle and it’s an extremely dependable dog. You’ll do better in a single dog household but they are great with people.

Of course, you’ll notice they make all kinds of noises including grunting and snorting (and they drool quite a bit).

These dogs have gotten a bad rap over the years (along with the one that’s next on our list), but they’re definitely a strong dog.

Bred for herding cattle as well as pulling wagons, these dogs definitely don’t back down from a job, or a fight, which is why it’s important to work with them from the time they’re young.

The temperament of a Rottweiler can be a little questionable if you don’t.

They tend to do better as the only animal in the family, though they can be convinced to share a home with another dog.

Rottweilers, when trained properly, can be gentle, playful, protective, and fiercely loyal to their owners and families.

You’ll likely want to keep them away from cats, but you’re going to love having them around on their own.

Pitbulls are packed with a whole lot of muscle for its small frame, after all, that’s what makes them so powerful and strong.

Not only that, but they’re actually really fast as well.

They’re strong enough to pull weights and they’re definitely not afraid to attack any danger, despite their small size.

While they have a bad reputation lately, these dogs aren’t violent unless they’re trained that way (though their look could scare off many a would-be intruder).

Pitbulls that are trained properly are loyal, loving, and gentle.

Not only that but they can be great with children and adore their family.

Just make sure if you are adopting a dog you look into the dog’s history and take the right measures so you and your dog are as safe as can be.

If you do end up getting a Pitbull, be sure to get them the best shampoo for their breed as well!

These dogs look a lot like the Siberian Husky, but they’re entirely different dogs.

They’re actually larger and they’re even stronger with the ability to pull just about anything.

You thought Siberian Huskies were strong, these ones are definitely going to get the job done, and faster too.

Of course, you’re going to have a very opinionated dog with this one because their attitude can sometimes get in the way of what they should be doing, but they’re going to absolutely love your family.

These dogs are extremely patient, which makes them great with children, and they also absolutely love as much attention as they can get.

These huge dogs definitely look fluffy and lovable (and they are).

They’re used in the Swiss mountain ranges to search for those who have become lost from an avalanche and they have absolutely no problem digging through the snow.

They’ll even pull a trapped person out of it and drag them back to safety if needed.

The large size of these dogs definitely showcases their strength, though it’s going to take a whole lot to get them to do something they don’t want to do, with their massive size (though they’ll generally do what you want them to do).

These dogs are extremely loyal, completely selfless, and amazing as pets.

They’re also gentle and extremely tolerant, though you’ll want to make sure children are well-behaved around them.

Great Danes are some of the most athletically gifted dogs in the entire world. They’re incredibly loyal to their owners and are loving as well.

Although they might seem frightening at their size, they’re actually a lot more easy-going than most people realize.

Keeping them happy includes long walks, trips to your local park, and an overall understanding of bringing them outside when they need it.

They’re meant for the outdoors to run in, so don’t neglect it.

However, keep in mind some can be even smaller or larger on these scales. Their coat tends to be a light and somewhat solid color of black, gray, or blue.

They have an average lifespan of 8 to 10 years.

Whenever you think of a dominant dog breed, usually a breed with the name mountain dog should give you the inclination of a strong dog.

A Bernese Mountain Dog is a massive, but loyal and affectionate dog. Like most more substantial dogs, they love the outdoors and crave it to go on long walks and fun activities.

Their coat is usually a thick combination of colors such as white, black, and brown.

Unfortunately, they only have an average lifespan of 6 to 8 years.

When you think of devoted and intelligent dogs, Boxers are on the top of the list when it comes to those categories.

They’re loving dogs, who tend to be more patient than most dogs. Plus, they’re some of the most fearless dogs on the planet.

Physically, they’re anywhere from 21 to 25 inches in height, with females being a bit smaller than males on average. Weight-wise, they’re in the range of 55 to 71 pounds.

Similar to Great Danes, their coats tend to be very thin, and are a combination of lighter colors such as brown and white.

They have an average lifespan of 10 to 12 years.

If you want to talk about a pure massive dog, Caucasian Ovcharkas are the way to go.

Although they might seem scary, they’re incredibly loving dogs if appropriately treated.

Their fur is extraordinarily fluffy and is usually a combination of colors such as black and brown.

They have an average lifespan of 10 to 12 years.

Similar in appearance to Great Danes, but with more alert ears, Doberman Pinscher’s are obedient, yet powerful dogs.

They’re fearless, and confidence makes them excellent guard dogs, but they can be lovey in the same sense.

Despite being relatively light for their height, they’re very athletically gifted and are deceptively strong.

Their coat is usually light and black with a brown hint, but you can indeed find other color variations.

They have an average lifespan of 10 to 13 years.

Usually, when you have “wolf” in the title of your breed name, it’s pretty easy to assume you’re a giant dog.

Irish Wolfhounds are thoughtful and sweet-tempered dogs that love the sense of family. With this in mind, they’re still mighty and muscular dogs.

Physically, they’re a staggering 32 to 36 inches height-wise and weigh anywhere from 115 to 180 pounds.

They’re genuinely massive dogs that are filled with love and joy at the same time.

They tend to have lightly curly or long coats that are lighters colors such as gray and tan.

They have an average lifespan of 6 to 10 years.

Leonberger’s are a German dog breed that embodies an obedient and loyal dog to every degree.

They’re brilliant, and when it comes to learning tricks or obeying commands, they’re the dog for you.

As you can imagine, they’re huge dogs, but you’ll be surprised at how gentle they can be.

Their coats tend to be long and bit a thick like Golden Retrievers, but a bit darker color-wise.

They have an average lifespan of 8 to 9 years.

Mastiffs are one of the most common dogs when it comes to pure strength and powerfulness.

Unlike what you might assume, they’re good-natured and affectionate dogs. They love their families and are extremely loyal as a result.

They weigh quite a bit, and you never want to be on one’s bad side. Their coat is almost always a slight tannish color, but you might find a few variations in color.

Similar to Mastiffs, Newfoundlands are incredibly massive, yet playful dogs. They’re sweet-tempered, trainable, and are incredibly gentle, despite their size.

You won’t find a more playful dog, but make sure they get enough rest and water during warm months, so they don’t overheat.

Physically, they’re roughly 25 to 29 inches in height and weigh 99 to 150 pounds. Their coats are very dark, long, and thick.

Some Newfoundlands have a white color on their belly, but most have a solid black color throughout their coat.

They have an average lifespan of 8 to 10 years.

If bodybuilders were dogs, they’d be a Dogo Argentino. These dogs are very muscular, and it’s evident through their body shape.

Physically, they’re 23 to 27 inches in height and weigh anywhere from 80 to 100 pounds. Although this might seem a bit smaller compared to other dogs on this list, they’re deceptively strong.

Coat-wise, they tend to be all white with a skinny coat.

They have an average lifespan of 9 to 15 years.

No matter what you’re looking for in a dog, you’re going to find strong and brave ones right here.

In fact, each of these are the strongest dog breeds you’re going to find and they’re definitely going to keep your family safe or work hard wherever you need them.

Plus, you’re going to have a sweet and loyal member of the family. 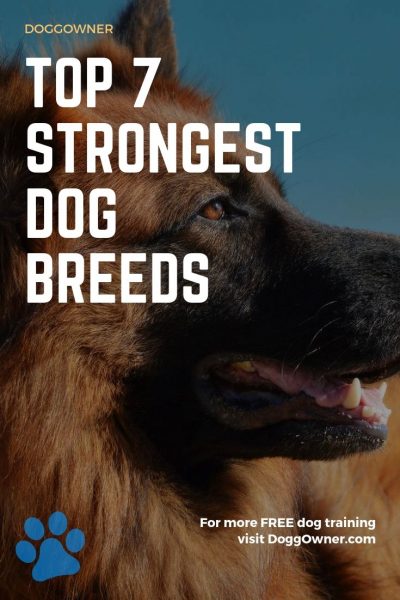