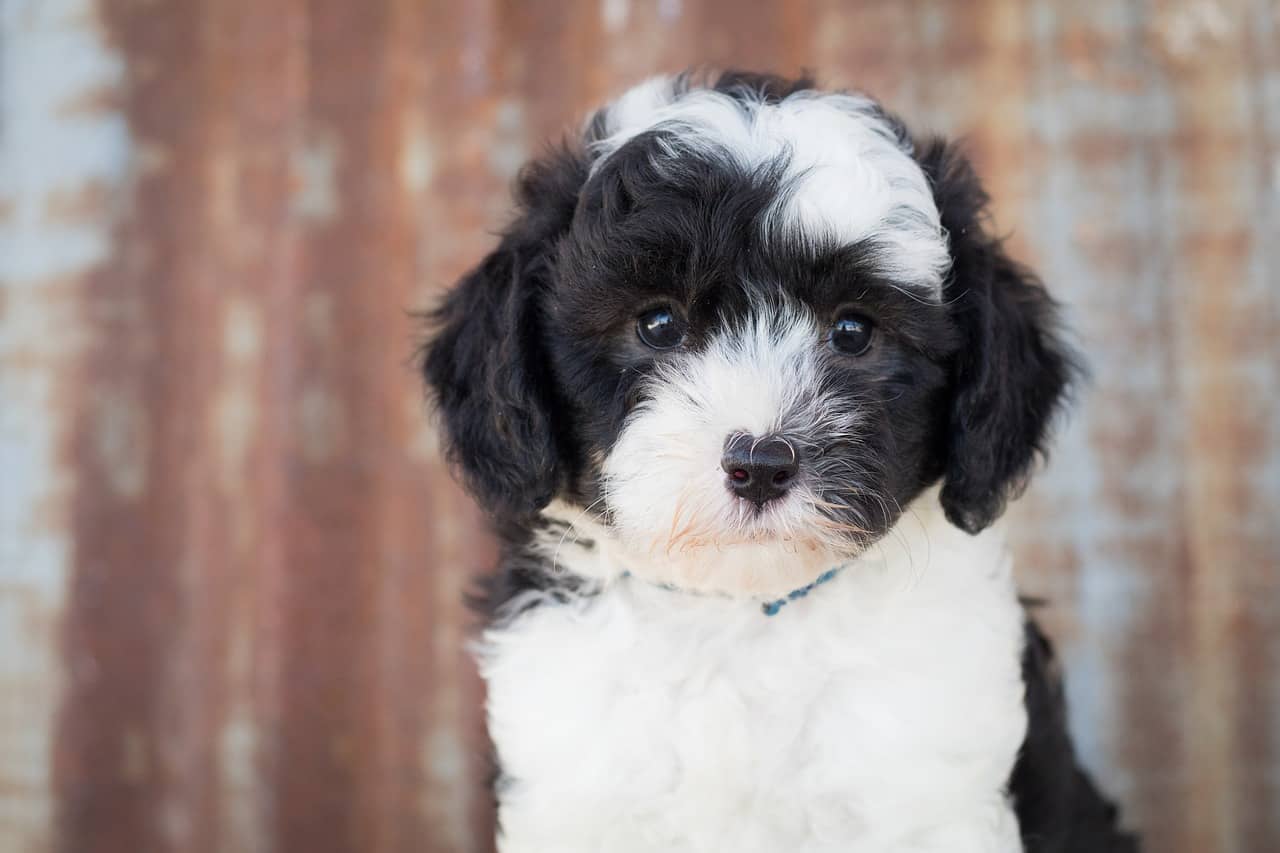 The Sheepadoodle is a fun, energetic, and intelligent family dog. Bred from an Old English Sheepdog and a Poodle, Sheepadoodles are a combination of the best traits from both breeds.

They make good pets for single or novice dog owners and, as well as being utterly adorable, are truly loyal companions.

Below, we’ve created a comprehensive guide to the breed, and what you can expect if you decide that a Sheepadoodle is the dog for you!

Sheepadoodles are, first and foremost, friendly and loving dogs. They enjoy being around people and are noted amongst many owners as being real ‘people pleasers’.

This is a testament to their intelligence; as a Sheepdog and Poodle mix (both sitting at the high end of the dog-intelligence spectrum), they are generally obedient and gentle as they grow up.

Sheepadoodles love to play and are extremely affectionate towards their owners. Like most dogs, they are also very loyal.

They are seen as being good dogs to adopt, as the Sheepadoodle is described as having a real love for life by owners – a characteristic that makes it a lot easier for you to bond with your Sheepadoodle.

Despite having a naturally energetic nature, the Sheepadoodle is also quite a calm dog, allowing owners to enjoy the best of both worlds.

Due to the Sheepdog in them, Sheepadoodles can be boisterous and will require appropriate physical and mental stimulation because of this.

As puppies, they can be a little intense, but this tends to wear off as they grow up. In terms of socializing, Sheepadoodles are also known to be friendly towards other dogs.

If you breed a small poodle with an Old English Sheepdog, then the Sheepadoodle will be a little smaller, and vice versa when mixing a larger poodle.

The Sheepadoodle is a well-proportioned dog and sports a muscular stature, with both the male and female measuring up to around 22 inches in height (nearly two feet).

They can weigh anywhere between 60 to 80 pounds (27 to 36 kilograms), and this again depends whether you buy a mini Sheepadoodle or a larger Sheepadoodle.

For reference, the mini Sheepadoodle weighs under 55 pounds (25 kilograms).

The Sheepadoodle is said to resemble a big, cuddly teddy bear – and this is often reinforced by their affectionate temperament.

With their long, curly coat, the Poodle element of their appearance sometimes overrules the Sheepdog part.

However, as with any crossbreed, their coat’s appearance depends on which traits they have inherited from which parent.

The Sheepadoodle normally sports the typical Sheepdog black and white, but can also be fully black, grey/black, or brown.

The Sheepadoodle is considered a ‘designer dog’ and is a fairly new crossbreed.

As with many poodle crosses, they were designed in the hope that the puppy would inherit the hypoallergenic traits of the poodle.

Although we don’t know the exact date that the first Sheepadoodle was bred, it is likely to have been in the last 20 to 30 years.

Some people think that the breed was actually the result of a US army experiment designing military dogs in the 1960s, although this isn’t factually confirmed.

A Star Of The Show…

The Sheepadoodle’s popularity was boosted massively due to a number of celebrities owning one.

The breed has been heavily shown off, in all its cute glory, on social media channels – notably by Meryl Davis, the ice dancer.

Despite not being a purebred dog, the Sheepadoodle is very valuable. Buying one could cost you upwards of $3000.

The Sheepadoodle is a first-generation mix, which means that there are equal parts of both breeds in the Sheepadoodle’s gene pool; it’s literally a 50/50 Sheepdog/Poodle mix.

They are more commonly available in the US, and due to their breakthrough popularity, many dog breeders in Europe have also begun to breed the Sheepadoodle.

How Easy Is It To Train Sheepadoodles?

As we’ve already said, both Poodles and Sheepdogs are extremely sensitive and intelligent animals.

The Poodle is widely regarded as the second most intelligent dog in the world, only losing out to the Border Collie – another type of Sheepdog.

The Sheepadoodle puppy will probably be fairly boisterous, and they may try to push the boundaries a little between four-to-eight months of age.

This is because they’re experiencing the equivalent of the ‘terrible twos’ toddler stage.

Because of this, it’s vital that training starts early.

Early puppy training shouldn’t necessarily consist of teaching tricks (apart from the basics such as sit, lie down, and stand up), but with a heavy focus on potty training and general manners.

You must remember to enforce the point that you are in charge, and you are your Sheepadoodle’s master. To aid this process, trial ideas such as eating your meal before your dog eats theirs.

Sheepadoodles won’t react particularly well to shouting, but a firm and direct manner must be taken when training them.

When you do come to teaching tricks, you must remember that puppies have very short attention spans.

They’ll quickly get bored, and probably take to having a chew at something that they shouldn’t be putting in their mouth!

As with any puppy, a rigid daily schedule must be in place.

The puppy must be waking up at virtually the same time daily, being fed and toileted at the same time every day, and has to be played with at consistent intervals.

Without a structure, your Sheepadoodle puppy will quickly start to think that they’re the king of the castle, causing disruptive behavior.

Sheepadoodles need to be socialized – ideally from an early age.

Whilst they can’t go for walks or to puppy classes until their vaccination boosters are done, people can still come and see the puppy at your home.

If you choose to do this, make sure to expose them to different age groups, genders, and ethnicities.

At home, ensure that they experience plenty of different sights, smells, and sounds.

You don’t want to scare your Sheepadoodle, but they need to become accustomed to everyday sounds such as the vacuum cleaner.

Once they have completed their course of jabs, then make sure to allow your Sheepadoodle to meet other puppies and adult dogs.

They may be shy at first, but they’ll soon come out of their shell!

It’s good to allow them to experience different places in your area, but it is also wise to keep one walk a day in the same place.

This will allow them to ‘befriend’ certain dogs, coaxing that initially reserved nature away much faster.

Sheepadoodle shedding will vary from dog to dog. If your Sheepadoodle inherits the thick, double coat of the Sheepdog parent, then they will require daily brushing – especially during the summer months.

However, if your Sheepadoodle inherits the single-layer Poodle coat, then they will require less brushing, but more frequent bathing, as well as a trip to the hairdressers fairly often!

Luckily, the Old English Sheepdog is actually around 80% hypoallergenic, and sheds less than some of the other Sheepdog breeds, for example, the Border Collie.

Brushing your Sheepadoodle is vital to ensure that their fur does not tangle.

Brushing at home will also save money in the long run, as you will not have to hire a professional groomer to weed out the tougher tangles in their coat.

Pin brushes are recommended for Sheepadoodle grooming, you should brush your dog for about 10 minutes each day.

You can find this type of brush on Amazon and many other pet websites.

As with many dogs, nail clipping will be required with the Sheepadoodle.

This is especially important if you have a small or miniature/’toy’ Sheepadoodle, as their nails, when long, can sometimes dig into the ground when walking and cause discomfort.

Bathing may be required more frequently for Sheepadoodles with longer coats.
Relationship with the family

As we mentioned earlier, the Sheepadoodle is a brilliant family dog. Due to its intelligence, it’s highly trainable and generally obedient.

Their natural ability to sense emotion – Sheepdogs are known to be a highly sensitive breed – makes them very good therapy dogs.

It has been noted that Sheepadoodles have strong bladders, which may make potty training easier for the time-constrained family!

Are Sheepadoodles Good For Small Children?

Similarly, they aren’t naturally barky dogs and don’t drool as much as Labradors or Rottweilers, for example.

As we mentioned earlier, despite their energetic nature, Sheepadoodles can also be calm when they need to be. This further adds to their value as a family pet – especially for those with smaller children.

If you choose to get a Sheepadoodle, you can’t shy away from exercising them!

Like all Sheepdogs or Sheepdog mix-breeds, Sheepadoodles will need a lot of mental and physical stimulation. This is because of their natural herding instincts.

Once again, with any crossbreed, some traits may shine through more than others. Trust me, from one Sheepdog owner to another, you’ll have your work cut out!

Watch out for nipping!

One thing that owners may need to watch out for is nipping.

Once again, due to the Sheepdog’s natural herding instincts – and if your Sheepadoodle inherits more Sheepdog traits compared to Poodle ones – the breed has been known to enjoy herding small children, especially in the puppy stage.

Don’t worry, this isn’t quite as menacing as it sounds! However, it does mean that families may wish to take extra care when the Sheepadoodle is a puppy.

It would be wise to only allow small children to play with the puppy if they are under adult supervision.

I, for one, took to wearing rubber boots or old high-top sneakers when I was in the garden with my Sheepdog in his infancy, due to his tendency to nip at ankles.

Like any dog that doesn’t receive the required exercise or attention, the Sheepadoodle may become destructive when bored or hyper.

As they are intelligent dogs, they will learn bad behaviors as quickly as they’ll learn good ones. This is another reason as to why having a rigid routine is so important.

Remember, positive reinforcement training is considered a lot better than punishment-based elimination training – where dogs are rewarded for good behavior, rather than told off for bad behavior.

Sheepadoodles can also be prone to separation anxiety, which makes early socialization all the more important.

As puppies, they must be left alone for set periods of time throughout the day to combat the likelihood of anxiety states.

In terms of physical health, there are a few issues that the Sheepadoodle is known to be prone to. These include:

On the topic of food, the Sheepadoodle is a bit of a ‘kid around candy’ dog when it comes to food left around the house.

Try to make sure you keep him to his meals, and only his meals!

Are You The Right Person To Own A Sheepadoodle?

So, you’ve read all about them, and now it’s time to decide if the Sheepadoodle is the dog for you.

If you are looking for a loyal, intelligent, and hypoallergenic family pet, and can commit to a fair amount of mental and physical stimulation, then the gorgeous Sheepadoodle may well be the dog for you!