Rottweiler Vs German Shepherd: Which Dog Is Better? 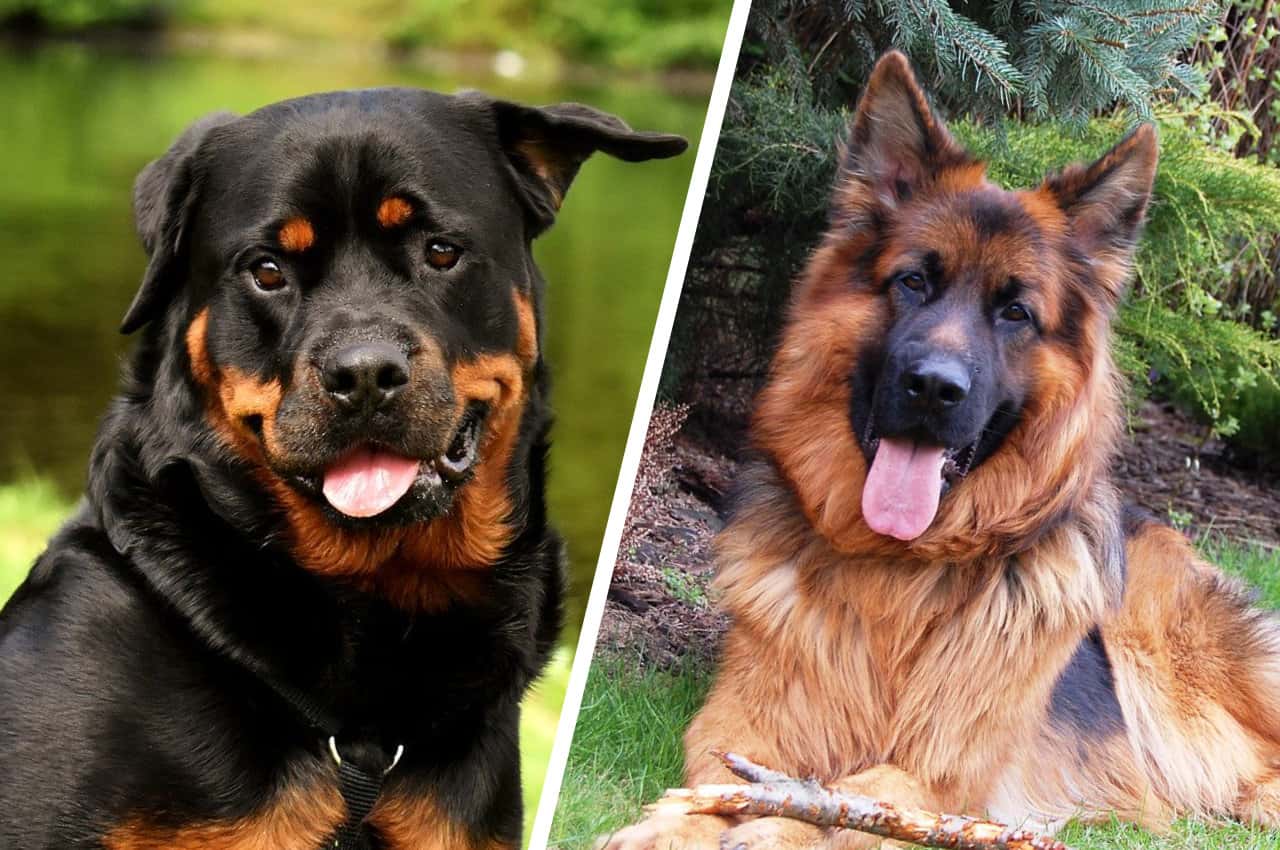 So you want a big fierce guard dog? Obviously, since you’re considering which one should you choose between a Rottweiler and a German Shepherd.

They both look tough and yes, they are excellent protection dogs, but fierce?

Let’s just say they’re as fierce as you make them be. Train them well and you’ll have a dog with a friendly personality!

However, since you’re here you probably want to know everything about these breeds.

This Rottweiler Vs German Shepherd guide will explain all the similarities and differences between the two.

The guy who came up with this phrase must have been thinking about Rottweilers or German Shepherds because they both work very hard. Or at least used to, back in the day.

They share the same country of origin – Germany, obviously.

However, the history of the Rottweilers can be traced back to the Roman empire when these dogs were used to herd the cattle that fed the marching armies.

This is how they ended up on German territory.

Later on, they got decommissioned and took on civilian jobs, guarding and even pulling the meat carts the butchers used.

Apparently, their name comes from the German city of Rottweil, where they had many butchers presumably.

Legend has it butchers put the coin they earned in pouches strapped to their dog’s neck. If you look at a Rottweiler, it’s easy to see no one would dare to try and steal the money.

German Shepherds are recognized as herding dogs, although it’s unlikely this is what you’re looking for.

Both dogs served in the military in the 20th century, and they’re also highly recommended as service dogs.

If you’re not very familiar with these two breeds, you need to know that Rottweilers are bigger than German Shepherds.

Rottweilers have a dense coat with short hair, while German Shepherds have rather fuzzy coats with longer hair.

As they served as herd dogs, German Shepherds had to be outside all day every day, even in winter, which is why they were bred to have a double coat.

The undercoat is short and thick, while the long harsh hairs you normally see make up the outer coat.

Both types of dogs are large and muscular, but you can easily tell them apart by the shape of their heads.

A German Shepherd’s head is narrower than a Rottweiler’s and has a longer nose.

The shape of the muzzle can be a bit deceptive, as you might assume a German Shepherd with a longer nose to have a more dangerous bite.

However, it is the Rottweiler with its blunt nose and a square jaw that delivers a more forceful bite.

Pointy ears or not?

Yes, German Shepherds have pointy ears, although that’s what they look when they grow up. If you’re going to buy a puppy, don’t be alarmed if it has floppy ears.

That’s normal and since we’re on the subject don’t try to tape the dog’s ears up as some do. They’ll start sticking up on their own anywhere between two and eight months of age.

On the other hand, Rottweilers have floppy ears and should be left as such.

Some owners resort to cropping their puppies’ ears into a triangular shape to make the dogs look mean, but this amounts to animal cruelty and is completely unnecessary.

An adult Rottweiler is large enough to scare the hell out of any stranger who’d want to attack you.

If your Rottweiler starts growling the evil-minded stranger will run so fast he won’t have the time to check out the dog’s ears.

The dog with the waggy tail?

That’s a bit of a sensitive issue, especially for Rotties. Just as some owners crop their dog’s ears, others remove the animal’s tail, allegedly to make them more fashionable.

This practice has been outlawed in the UK and Australia, so there at least Rottweilers are free to wag their tails.

As a matter of fact, a Rottie’s tail is quite similar to that of a German Shepherd, only less hairy.

Rottweilers are low-maintenance dogs, especially because they have short hair. There’s no need to have its hair cut by a professional and he’ll be just fine with minimal grooming.

Rottweilers shed only moderately, which is why you should make an effort to brush his hair once in a while.

German Shepherds, on the other hand, are heavy shedders so you need to be prepared to vacuum the rooms where he is allowed pretty often.

They need moderate grooming and you should brush the dog’s coat regularly to reduce shedding.

Taking your pet to a doggie beauty parlor for a trim is not really necessary, but it won’t hurt. Also, with such long hair, the dog will certainly appreciate a bath every now and then.

Look for a dog shampoo if you want to keep his coat shiny.

Looks aren’t everything, including when trying to find a pet for your family so let’s see how these two large breeds behave with their owners and with other animals.

Both. In terms of intelligence, Rottweilers and German Shepherds fall into the category of very smart dogs.

This is very important for training purposes. Both types of dogs are natural born learners and they love to be taught new commands or tricks to show off.

On average, these dogs learn a new command with only five repetitions or even less. And they do obey if they’re properly trained.

Their outstanding intelligence is what makes both breeds very suitable for police work, search and rescue missions or as guide and therapy dogs.

One other thing – you need to train these two breeds well while they’re young as they don’t handle punishments well.

How to train a Rottweiler

Rottweilers have a reputation for being stubborn, which they sort of are.

When you buy such a dog you need to put some time and effort into training him or employ the services of a professional.

You need to be careful with that as they are huge animals and can do a lot of damage if they’re not properly trained.

A Chihuahua bite is merely annoying, while a Rottweiler bite might require surgery.

The good news is that Rottweilers are rather greedy dogs and you can use tasty treats to reward good behavior in the training session.

Keep in mind that being stubborn they might try to find loopholes when it comes to following orders, even though they understand perfectly what you want. Don’t let them manipulate you!

How to train a German Shepherd

German Shepherds are easily trainable. They must have more German blood than Rottweilers who came from the Roman Empire, which explains why they’re keener on order and discipline.

They learn just as fast as Rotties, but they’re more likely to obey a command.

They’re not that interested in food, so treats don’t really work in training sessions. However, they’re very playful, and making training sessions fun is the key to raising an obedient dog.

Their ancestors used to work a lot and spent the greater part of the day outside, herding animals or pulling the meat cart.

Dogs today have a much easier life but they still need a lot of activity.

For Rottweilers, it is recommended that they get at least one hour of exercise per day, while German Shepherds need twice as much exercise.

If you’re thinking about buying one of these dogs to lock away in a room while you’re at work, forget about it.

You can keep either a Rottweiler or a German Shepherd in an apartment, provided that you take them out for a long walk several times a day.

Otherwise, these dogs are better suited for a house with a big yard where they can roam freely.

They’re not the most playful dogs, but both Rottweilers and German Shepherds like to play and be around their humans.

They do prefer a solid routine and a predictable environment. They prefer peace and quiet, rather than a noisy household with frequent guests.

While both breeds are loyal and good-natured, German Shepherds are more affectionate than Rottweilers.

German Shepherds form close bonds to their owners and can easily pick up on their emotions. They’re loving and like to spend quality time with their pet humans.

They don’t like to be left alone, especially when they’re young, so be prepared for your puppy to cry and panic when you leave the house.

Rottweilers also bond very well with their owners, but they’re a bit more independent than German Shepherds, so they might not show the same level of affection.

However, Rottweiler puppies are very scared of being left alone and will suffer from separation anxiety.

German Shepherds are a great choice as pets for a family with children.

These dogs love to be around children and the little ones will be pretty safe, unless, of course, they provoke the dog too much.

However, this is true for any breed, large or small, and young children should not be left unsupervised around dogs.

Rottweilers are not exactly kid-friendly, especially small children who might have a weird notion about playing with the family pet.

Strangers and Other Pets

At this point you can probably guess that Rottweilers don’t really care about strangers on their turf, nor do they tolerate other dogs in the household.

They can be taught not to try and tear your guests apart, but they’d prefer it if you didn’t have many strangers visiting.

On the other hand, German Shepherds are rather friendly with strangers, but not very keen on sharing your affection with other dogs.

Oddly enough, both types of dogs don’t have a particular problem with cats. They’re not exactly best friends with felines, but they will allow cats to live under the same roof.

Both Rottweilers and German Shepherds are very territorial dogs, which makes them an excellent choice as protection dogs.

As mentioned before, they like order and routine in their lives, and they will immediately detect a disturbance. An unwanted guest, two-legged or four-legged, will be swiftly taken care of.

You know the saying a dog that barks won’t bite? Well, these dogs don’t bark much, but they will raise the alarm if they detect a potential intruder. And bite!

Since they don’t make much noise, they’re a good choice as pets if you don’t want to deal with neighbors complaining about your dog’s excessive barking.

If you’re looking for a service or therapy dog, both breeds are perfect for the job.

They can assist people with visual or hearing impairments, seizures, or mobility problems, as well as provide affection for people with mental issues, anxiety disorders, or people in nursing homes.

Rottweilers and German Shepherds are rather healthy breeds and won’t require many visits to the vet if well-cared for.

However, they will face the same health problems as other dogs as they age.

You should be careful with Rottweilers as they have a high tendency to be overweight.

Make sure they get plenty of exercise and cut back on treats if your pet starts putting on too much.

Sadly, Rottweilers have a shorter lifespan, 8 to 11 years on average, compared to German Shepherds who tend to live between 10 and 13 years.

So, who’s the winner of the Rottweiler vs German Shepherd debate?

There’s no clear winner in the Rottweiler Vs German Shepherd contest. If you’re interested in a good protection dog, they’re both excellent choices.

If you have children you should probably choose a German Shepherd, which, by the way, is also an excellent companion for senior citizens.

Both breeds have a reputation for being aggressive, particularly Rottweilers, but that’s not fair to the dogs. There are no bad dogs, but there are bad owners!